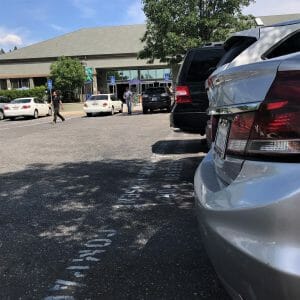 Grass Valley, Calif. June 17, 2019 – Last week, Jodi Selene was on her way to buy groceries at BriarPatch Food Co-op when she passed six vehicles parked with the engines on, idling, in the parking lot.

People were sitting inside their air-conditioned cars eating lunch, talking and texting on cell phones and bouncing babies on their laps.

“The irony is that their precious infant is going to inherit a world with more air pollution, rising seas, increased asthma and other illnesses,” said Selene, a member of the Environmental Team of Indivisible Women of Nevada county and an Accredited Professional for LEED (Leadership in Environmental and Energy Design).

With summer heating up, more and more people will choose to sit inside their idling vehicles with the air conditioner on, a practice that contributes to poor air quality.

In California, it is estimated that idling in a parked car burns more than 300 million gallons of fuel every year, emitting more than 3 million tons of carbon dioxide into the air, according to idlefreecalifornia.org.

As an alternative BriarPatch recommends people park in the shade with open windows, leash their animals outdoors with a bowl of water, or go into a building to keep cool. By choosing to turn off car engines, people will save money by burning less fuel and cutting down on engine wear. The environment will benefit with improved air quality and reduced greenhouse gas emissions that contribute to climate change.

“Most people want to do the right thing for the environment. With reminders, they might begin to check their Facebook posts before starting their car and take babies into stores,” said Selene.