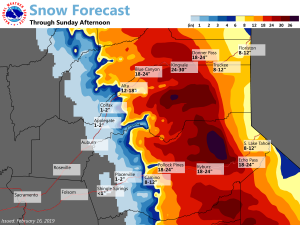 Broad upper trough is positioned over much of the western states with disturbances continuing to rotate through. Not much moisture left for the system to work with, however the cold cyclonic flow and unstable air associated with the system is very efficient with the low water content. Core of coldest air will drop south over NorCal tonight with snow levels falling from the current 3000ft level down to 2000ft or even localized 1500ft level.

Best snow will be over the Sierra from I80 south where 1 to 2 feet will be possible above 4000 feet…2 to 6 inches is expected for foothill locations between 1500-3000 feet, locally higher in more intense convective showers. Isolated thunderstorms with small hail will be possible through about 7 pm for Valley locations mainly between Red Bluff and Oroville. 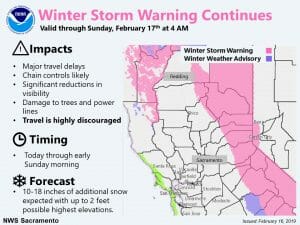 Lower snow level down to Redding area may put a few flakes in the air, but low moisture in the northwest west flow will keep accumulation generally below an inch, but can`t rule out isolated 2 or 3 inches over some of the higher foothill locations.

Convective showers will continue Sunday for the Sierra with 2-4 inches of additional snow at pass level, higher amounts Calaveras and Tuolumne counties, where up to 6 inches will be possible.

Upper low will move east Sunday night into Tuesday with high pressure providing a return to dry weather. Breezy north winds are expected to develop on the back side of the low during this period. Morning lows will be on the cold side in the low to mid 30`s. The breezy winds will act to diminish the freeze threat.

Amplified flow extending from the eastern Pacific into the continental U.S. will allow another cold upper low to impact the region mid-week. This particular system is evident in water vapor imagery as it approaches the far western side of the Aleutians and eventually into the Bering Sea. Lowering heights drop down from the Pacific Northwest into Northern California by late Wednesday night. The general southward trajectory of this upper low across the western U.S. is not ideal for substantial moisture availability. Cold temperatures aloft will steepen lapse rates enough to produce bands of showers, particularly in regions where orographics come into play. This will prove to be another cold Gulf of Alaska type system with 1000-500 mb thicknesses dropping into the 525-530 dm range. Consequently, snow levels will again be low accompanied by high snow-to-liquid ratios. While subject to change, snow levels may drop below 2000 feet carrying a threat for accumulations into the lower foothills. The primary opportunity for precipitation will be Wednesday afternoon until Thursday morning. Some timing issues exist with the 12Z ECMWF slower in clearing the region on Thursday.

In the wake of this system, general meridional flow transports cold continental air southward into Northern California. Although the air mass will moderate considerably, it should allow for below normal temperatures on Thursday and Friday. On Thursday, persistent cold advection will see areas of Burney Basin struggle to get out of the upper teens to low 20s which is roughly 10 to 15 degrees below climatology. By Friday morning, chilly temperatures will be evident over the entire region as the Valley stays around the freezing mark while Foothill locations sit in the low 20s. Into the mountains, minimum temperatures may dip to near 10 degrees.

Regarding the next precipitation chances, the GFS/ECMWF solutions are at odds with one another on the evolution of another Gulf of Alaska system for next weekend. The 18Z GFS favors an elongated longwave trough pattern across the Pacific Northwest which would force the storm track to the north. On the contrary, the 12Z ECMWF stalls an upper low well offshore which builds heights along the West Coast. Cannot put too much stock into either solution given model inconsistencies and high ensemble spread. Kept some precipitation chances in on Saturday for northern zones but with limited confidence.