February 13, 2020 – As Nevada County heads into its second year of commercial cannabis permitting, I feel compelled to share my perspective of the ordinance issues that arose in Year 1 in an effort to shape the collective mindset for the coming cultivation season. Without a doubt, last year was a huge win for the cannabis community, but also for the County administration.

Although no one would describe the process as easy, the County evidenced a strong intention to support a successful cultivation process early on. First, in October of 2018, the County authorized eligible farms to obtain temporary state licensing, a legal prerequisite to gaining provisional access to state licensing at the time. Then, in March of 2019, the County performed exhaustive land-use reviews on eligible parcels through a pre-application program, allowing farmers to get a jump on the permit process months before the cultivation ordinance was even finalized. Once the cultivation ordinance was enacted last May, the County gave limited authorization for those with submitted applications to partake in the growing season, though their applications were not finalized.

Of course, these new programs were not without mishaps. For instance, several temporary applications for “contiguous properties under common ownership” were approved in late 2018 which allowed some two parcel-holding cannabis farmers to obtain temporary state licenses for a larger canopy footprint. However, the ADP/CCP process disallowed the initial and more expansive temporary authorizations, leaving those farmers without provisional access to the state’s licensing system at the time.

Additionally, some farmers who partook in the County’s limited authorization to cultivate after submitting their permit applications didn’t follow through with the land-use process as diligently as they should have. I do assign some slight responsibility for that phenomenon to the County for using a vague letter to grant the authorization. In my view, that program was a hard lesson to us all that demonstrable benchmarks implemented via transparent guidelines are necessary in the cumbersome land-use process, for better and sometimes for worse.

This is especially true in cannabis, where we’re undergoing a seismic cultural shift at the same time as subjecting ourselves to the purgatory that is applying for commercial building permit applications in areas zoned for agricultural uses. We are subject to what my friend/colleague Wade Laughter aptly characterized as the “Walmart in the woods” land-use standard. But many of the ills tossed at the feet of the Community Development Agency really belong with the state Legislature, as cannabis has been categorized as “commercial” rather than “agricultural” activity. That is not the fault of the CDA, and I am hyper-cognizant that rural Counties around the state are actively working to reduce the land-use quagmires caused by the commercial designation, including but not limited to Nevada County.

For most of my life, cannabis farmers have not had access to the political process as an avenue to effectuate meaningful change, which is why I was forced to litigate our demands for basic Constitutional protections in the past. But today, the County staff are issuing official press releases congratulating Nevada County cannabis farmers on their big wins at the Emerald Cup. To me, that is a win beyond measure.

The peace that comes with winning a lifelong fight has allowed me to take a more careful aim at the areas to expend energy on shifting local or state policy. Recently I wrote a blog about a County staff proposal to raise the penalties for non-cannabis related land-use violations to the same high level of enforcement for cannabis violations, which I believe is a significant government overstep. But to be explicit, lest my intention be misconstrued, my professional critique of a particular policy is not a critique of how Nevada County is proceeding on cannabis: I am in wild support of Nevada County’s cannabis program to date.

While we can expect significant political wrangling and almost certain litigation at the intersection of land-use ordinances and individual liberties in the County’s near future, that fight belongs to someone else. Legal controversies will continue to swirl around us on all political levels, so we—as a cannabis community—must be laser focused on lowering cannabis taxes, reducing land-use quagmires, increasing access to licensure, and supporting regionally-based marketing strategies such as appellations.

We have to be well represented politically to have any chance at success in the heavy lift that is cannabis politics, which brings me to why I am voting for Heidi Hall for District 1 Supervisor. In her first term, Heidi supported common sense regulations that allowed cannabis agriculture to get its footing in Nevada County. She showed up at cannabis policy meetings long before she was a Supervisor, and then she consistently applied a progressive approach to cannabis politics after she got into office. To me, that means something.

As the cannabis community has only recently gained access to traditional political channels, we should use our powerful political voice for the representatives who championed cannabis farmers from the beginning. For Nevada County’s District 1, that’s Heidi Hall. 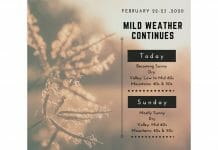 Weather: No change in sight