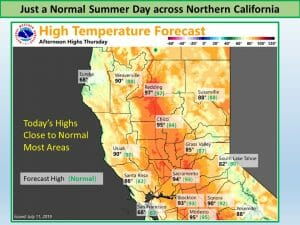 July 11, 2019 – No precipitation expected through the extended period under high pressure. Near normal daytime highs today then a few degrees above normal Friday and Saturday. Back down to near normal for the first half of next week. Breezy winds through the Delta and over the Sierra. Limited coastal stratus into the delta next few days then more coastal stratus intrusion likely in the delta region early next week.

High pressure aloft over the southwest U.S. continues to build back westward bringing fair skies and a continued warming trend. Increasing pressure trend has squashed down the marine layer with Fort Ord profiler showing marine layer depth down to just over 1000 feet. Therefore, do not expect the coastal stratus intrusion that impacted the southern Sacramento and Northern San Joaquin valleys Wednesday morning.

For today, nearly clear skies and warming airmass will bring daytime highs up to just above normal for this time of year. Airmass warms a bit more on Friday bringing up daytime highs a bit more and should start to see a few places topping the 100 degree mark in the northern Sacramento valley. 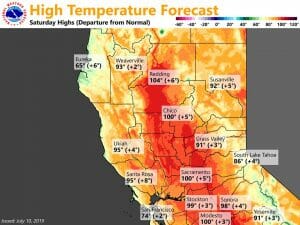 Daytime highs level off over the northern CWA on Saturday as an upper level trough over the eastern Pacific approaches the coast. Farther south, temperatures will see just a bit more warming.

Most areas will see a noticeable cooling on Sunday with models in good agreement in bringing an upper trough into the Pacific Northwest. This cool down back to near season normals will continue going in to the early part of next week. With increased onshore flow, and likely deeper marine layer, the end of the short term period Sunday may see the return of night and morning coastal stratus in the delta and parts of the central valley.

Little change to the extended forecast as ensemble and model guidance continue to depict the ridge over the desert southwest weakening. This is due to a broad trough digging into the Pacific Northwest. High temperatures are forecast to drop a few degrees each day, putting most areas at or below normal for this time of year.