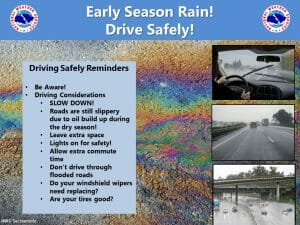 December 2, 2019 – Wet weather continues today. Travel difficulties persist across the higher elevations. Unsettled pattern may bring some showers each day this week with a stronger storm late in the week.

Stream of moisture continues to move up from the south southwest ahead of the low near 40N/130W. Radar continues to depict a large area of light to moderate rain, mainly across the southeastern two thirds of the forecast area. 12 hour rainfall totals generally range from 0.50 inches to around an inch, but local amounts of 1.50 to 2 inches have occurred in favored upslope areas of the foothills and west slopes of the northern Sierra. The Fairfield and Vacaville area has also seen enhanced rain from the strong low-level southeasterly flow impinging on the coastal foothills.

Snow level radars at Oroville and Colfax indicate the snow level is presently around 7-8k ft, but it usually in reality is around 1-1.5k ft lower, and Caltrans cameras still indicating snow over Donner Pass and Echo Summit.

The upper low will drop southward along 130W today. Eventually precipitation will begin to taper across the region by this afternoon, and especially this evening, as large-scale forcing diminishes and orographic flow decreases across the northern Sierra.

Low pops and qpf expected Tuesday and Wednesday as the area will be in between the low moving inland to our south across SoCal and short-wave ridging to our north downstream of the late-week system. Most of the area will remain dry on Thursday, but increasing warm-advection may lead to light precipitation across the northern mountains. Still looks like stronger storm will bring increasing precipitation and wind on Friday.

Active pattern continues late in the week as an impressive upper low, characterized by mid-level heights of 520-dm with anomalies around 2 standard deviations below average, approaches the forecast area. While some weakening is expected as the system tracks closer to the coast, expect at least a moderate strength atmospheric river event late Thursday continuing into Saturday. The 18Z GEFS ensemble probabilities remain adamant favoring this system impacting areas between 35-43N latitude which covers all of northern California. Impacts would include additional heavy precipitation, strong winds, cool temperatures, and mountain travel impacts due to heavy snow.

Preliminary QPF amounts indicate 1 to 2 inches in the Valley, and 2 to 4.50 inches over the foothills/mountains. Snow levels are anticipated to be around 5500-6500 feet through Friday evening, then lowering to around 5,000-5,500 feet late Saturday. ECMWF ensembles are indicating high probabilities of snow exceeding 2 feet over the Sierra. Windy conditions are also expected in the Valley, with the latest ECMWF ensembles mostly showing 30-35+ mph during this timeframe. Lingering shower activity is expected over the Sierra through early Sunday morning. Then, dry weather returns early next week.