June 20, 2017 – On Monday, June 19, Sierra foothill residents staged a powerful silent protest at Rep. Tom McClintock’s Argonaut High School town hall meeting in Jackson, California. Dressed in the red robes and stark white bonnets featured in the 1985 Margaret Atwood novel, The Handmaid’s Tale, a dozen women, ages 12-70, walked into the center of the gym in pairs to protest McClintock’s tenure in office and his voting record. During his time in the House, McClintock (R-CA) has voted against pay equity for women, protections against sexual harassment and discrimination, and the Violence Against Women Acts of 2009 and 2013.

“History has its eyes on you,” said a hand-painted banner unfurled by two women accompanying the handmaids. The silent handmaids included Foothills Rising co-founders Kate Hege of Amador City and Amber Hoiska of Ione, “Who Are We McClintock? Calling Group” founder Alisa Jaffe Holleron of Fiddletown, and members of Indivisible. Foothills Rising is based primarily in Amador and Calaveras Counties.

“The autocracy, the lack of democracy, the things that are happening to women, the things that are happening to the environment, and the dystopian future presented by that novel are issues we have to worry about today,” said Foothills Rising Co-Founder Steve Wilensky of Glencoe, a former Calaveras County supervisor. Wilensky acted in the role of the chauffeur at the protest, in another nod to the novel, which has recently been adapted into a 2017 Hulu television series.

The action and costumes were Hege’s brainchild. On Monday evening, she said, “Tonight, we showed Tom McClintock what local organizing looks like.” Her mother-in-law, Amy Turner, a fourth-generation Amador County resident, hand sewed the dozen robes and bonnets in Amador City. Before the women walked silently into the crowded gymnasium, Foothills Rising members distributed a handout explaining the correlation between misogyny and autocracy.

Foothills Rising seeks to foster community-building, participation in local government, presence in state government, and pressure on the federal government through community organizing. The group’s next open, public meeting is Sunday, June 25 at 3pm, in the Mokelumne Hill Town Hall. The guest speaker will be Congressional candidate Roza Calderon, one of four female opponents McClintock is facing in 2018. Other announced candidates include Regina Bateson, Rochelle Wilcox and Jessica Morse. Jack Garamendi, Calaveras County Supervisor, will also be speaking to the group about “Running for Local Office and why you should do it.”

A link to video footage of the silent protest is on YouTube at: https://www.youtube.com/watch?v=iXeX27AWSYY 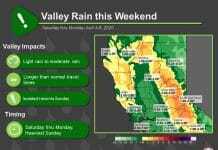