Fire at a glance (numbers)

Dorsey IC is starting to release some resources back to their home units, they will be available for any new fires or other emergencies.

Mop-up operation are starting, they will take several hours. Firefighters are still working hotspots and reinforcing the containment lines.

Grass Valley/Nevada City Fire Chief Mark Buttron jut gave the following update: “The fire is looking good, both hand and dozer line are almost complete all around. Phenomenal work by all the agencies who stopped this fire. There are no injuries reported.”

Air Attack will be patrolling the Dorsey Fire.

The Atria residences are shelter in place, no evacuation at this time. Everything south of Sutton is evacuation warning only, meaning get ready to go.

The Dorsey fire is estimated at 8-10 acres, holding at Dorsey. Good progress being made. The Dorsey off ramp is being shut down as a precautionary measure.

The Community Resource Center at Sierra College has closed as a precaution due to the fire at Sutton and Dorsey.

Fire activity is moderating, even with winds hampering containment efforts.

A total of four water tenders to the Dorsey Fire.

Ash is starting to fall in Grass Valley. Additional water tenders are being ordered to the fire.

Firefighters are making good progress, picking up the spot fires.

Evacuations in the immediate area of Dorsey and Sutton Way. The goal is to hold the fire west of Brunswick and north of Dorsey.

Grass Valley Police is blocking the area for any trough traffic. One spot fire on the other side of Dorsey Drive is being picked up by the firefighters.

Firefighters are reporting spotting onto the Atria property. Suppressing the spots as fast as possible.

Aircraft are grounded due to the winds. Firefighters on scene are making progress establishing a containment line. Please avoid the area.

Multiple reports of the fire, plume is widely visible in Grass Valley, Penn Valley. The fire is pushed by winds to the intersection of Sutton and Dorsey, units are at scene. 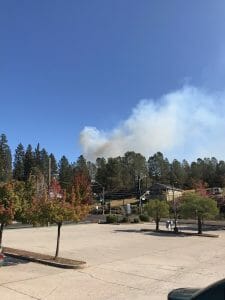