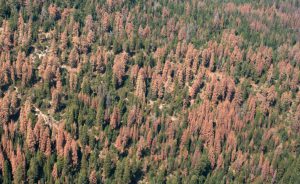 June 27, 2017 – California is now home to an estimated 102 million dead trees, a number shocking to even the most trained eyes.

“We’ve never experienced anything like this in California,” said Jeffrey Moore, an 18 year veteran of the US Forest Service.

“I never thought there would be a drought to this extent,”  Moore said.  “This drought has really pushed them over the edge and now the bark beetle population is taking advantage of trees that have been weakened by these multiple years of drought and just finishing them off.”

Moore and his team from the US Forest Service are spending the Summer crisscrossing the state doing tree mortality surveys from the air.  What they are seeing is large areas where dead trees outnumber live ones.

“Probably 70 to 80 percent of the whole mortality situation last year was mapped in areas of the Southern Sierra Nevada’s,” Moore explained.

“There’s a lot of dangers with this many dead trees,  fire being the top concern.  Also, we have standing dead trees in close proximity to buildings and where people live, work and play.”

Many of these trees are in areas frequently visited by campers and hikers, creating hazards that aren’t always visible to the untrained eye.

“Definitely keep your wits about you when you’re in a forested area.   Look for those dead trees that are still standing.  If they’re near you, don’t put up a tent.  Just try to be very aware.”

Dead trees can often be spotted by either having a gray or reddish hue.

Jeffrey Moore says the wet winter will go a long way in helping future generations of trees, but cautioned it’s just a start.

“One good year is a tremendous help, especially for the trees that made it through this, I think that they’re going to be much better off going into the future.  But, one year is just one year and we’re going to need a couple more good year for these trees to be really healthy again.”

More information on California’s tree mortality can be found by visiting the following links: