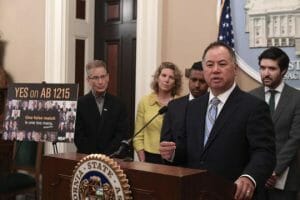 SACRAMENTO, August 13, 2019 – After putting facial recognition technology to the test using photos of all 120 members of the State Legislature, the American Civil Liberties Union of California released results that further support the need for AB 1215 by Assemblymember Phil Ting (D-San Francisco), which bans facial recognition in police body cameras. The analysis shows that facial recognition software marketed to law enforcement agencies mistakenly matched the faces of one out of five lawmakers, 26 lawmakers total, with images in an arrest photo database, including Ting’s. More than half of those falsely identified are lawmakers of color, illustrating the risks associated with the technology’s dangerous inaccuracies and the certain erosion of civil liberties should California police departments add the technology to officer body cameras.

“This experiment reinforces the fact that facial recognition software is not ready for prime time – let alone for use in body cameras worn by law enforcement,” said Ting. “I could see innocent Californians subjected to perpetual police line ups because of false matches. We must not allow this to happen.”

In the real world, such mistakes could have falsely implicated those legislators in a number of alleged crimes. Modeling the test after law enforcement’s current known uses of facial recognition technology, the ACLU compared every California state legislator with 25,000 public arrest photos. An independent expert from UC Berkeley verified the results.

Facial recognition-enabled police body cameras would be a disaster for communities and their civil rights, regardless of the technology’s accuracy,” said Matt Cagle, Technology and Civil Liberties Attorney, ACLU of Northern California. “Even if this technology was accurate, which it is not, face recognition-enabled body cameras would facilitate massive violations of Californians civil rights.”

A similar test conducted last year by the ACLU misidentified 28 sitting members of Congress. Multiple studies of facial recognition technology have found systems to be inaccurate when used against women and people of color. Axon, a prominent body camera manufacturer, announced in June that it would not add facial recognition to its body camera systems, after its ethics board declared that it could not “ethically justify its use on body-worn cameras.” Microsoft also recently refused to allow a California law enforcement agency to use its facial recognition software with officer body cameras due to ethics concerns.

The California State Senate is expected to vote on AB 1215, also known as The Body Camera Accountability Act, in the coming weeks. The Legislature must pass all bills by September 13. The list of falsely identified California lawmakers is available here.