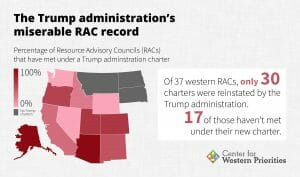 DENVER October 8, 2019 – For decades, the Bureau of Land Management has relied on Resource Advisory Councils (RACs) to bring together diverse public stakeholders and provide guidance for on-the-ground land management decisions. However, under the Trump administration, the Interior Department has taken steps to undermine these committees and cut out the public. In May of 2017, then-Interior Secretary Ryan Zinke suspended the agency’s 37 RACs, only to later reinstate 30 councils after adding politically-charged language to their charters.

An analysis of the Bureau of Land Management website conducted by the Center for Western Priorities finds that 17 of the 30 RACs reinstated by the Trump administration have not met. The administration appears not to have renewed charters for seven RACs. In total, more than half of the 37 RACs have not held a meeting since 2017.

“This administration has taken deliberate steps to cut the public out of decision-making that directly affects Western communities that rely on public lands,” said Center for Western Priorities Policy Director Jesse Prentice-Dunn. “By adding politically-charged mandates, the Interior Department is seeking to turn Resource Advisory Councils from a diverse group of local stakeholders into a rubber stamp for their ‘drill everywhere’ agenda.”

Numerous RACs in the West sit idle with member vacancies, many of which have not met since 2017. At the same time, under the Trump administration, the BLM has offered more than 19.5 million acres of oil and gas leases and eliminated protections for more than 13.5 million acres of public lands once protected by mineral withdrawals or as national monuments.