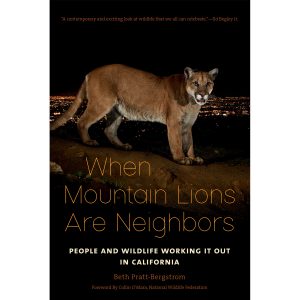 LOS ANGELES, CA, Aug. 3, 2016 – In partnership with Heyday Books, the National Wildlife Federation has released When Mountain Lions Are Neighbors: People And Wildlife Working It Out In California, a new book of stories celebrating people and wildlife thriving together—sometimes in the most unlikely of places. Written by National Wildlife Federation’s California Director, Beth Pratt-Bergstrom, the new release is an entertaining read of true tales about people and wildlife championing a new paradigm for conservation: coexistence.

Did you know that a mountain lion, known as P-22, lives in the middle of Los Angeles, that on the Facebook campus in Silicon Valley, Mark Zuckerberg and his staff have provided a home for an endearing family of wild gray foxes, or that wolves have returned to California after a ninety-year absence, led by the remarkable journey of the wolf OR-7? The book shares a few dozen stories highlighting the work of individuals, groups, organizations and communities throughout California that help foster place-based connections for wildlife to thrive alongside people, even in highly urbanized areas. For example, the Pollinator Posse, an all-volunteer group based in Oakland, California, has saved thousands of monarch butterflies and reinvigorated their population with simple milkweed plantings and education in the Bay Area. Other stories that Beth writes about include rice farmers sharing their fields with Sandhill Cranes, how California’s endangered desert tortoises are getting some much needed protection from a formidable ally: the United States Marines Corps, and how park staff and millions of visitors rallied to keep Yosemite’s famed bears wild.

“The truth is that we can each play an important role in ensuring a bright future for wildlife, no matter where we live, and these California stories serve as examples of how we can each take action, from anywhere across our country and around the world,” shares Collin O’Mara, President, CEO, National Wildlife Federation

Many do not realize that California and it’s many successful wildlife stories serves as a great example in understanding ways that people can conserve and better co-exist with wildlife that can serve as a model worldwide. Wildlife conservation has entered a new age, forcing those who work to protect and preserve wild things to reconsider their approach. This “new nature” is personal, urban, social, and diverse, and the unique place that is California has given birth to it.

California houses the largest number of national parks in the lower forty-eight states and also contains some of the largest cities in the country—both of which are essential to conservation efforts. For over 80 years, the National Wildlife Federation has worked to unite all people around a shared love of nature and wildlife by creating a welcoming community representative of all Americans, and the organization’s legacy in conservation has been far-reaching throughout its history. This new release is another example of this leadership.

“When the number-one threat to wildlife worldwide is loss of habitat, we can no longer think of our cities or towns or neighborhoods, or even our backyards, as exempt from the natural world—or as off-limits to wildlife. We need to expand our view and realize that our shared spaces are as essential to conservation as our traditional protected lands. We need to create a new model of suburban and urban wildlife refugia, ” says Beth Pratt-Bergstrom, Author, “When Mountain Lions Are Neighbors”, California Director, National Wildlife Federation.

When Mountain Lions Are Neighbors is a 240-page paperback with full-color photographs, and will be distributed to bookstores, libraries, museums, parks, and other retail locations on August 1st.  It will also be sold on Amazon.com and on the National Wildlife Federation’s website, retailing for $18 USD: http://www.shopnwf.org/Backyard-Wildlife-Habitat/Learn-About-Backyard-Habitat/2780-NWFMLB-When-Mountain-Lions-Are-Neighbors.pro

The author receives no royalties from this book.

Beth Pratt-Bergstrom has worked in environmental leadership roles for more than twenty-five years, and in two of the country’s largest national parks: Yosemite and Yellowstone. As the California Director for the National Wildlife Federation, she says, “I have the best job in the world—advocating for the state’s remarkable wildlife.” Her conservation work has been featured by the New Yorker, the Wall Street Journal, BBC World Service, CBS This Morning, the Los Angeles Times, and NPR, and she has written for CNN.com, Boom: A Journal of California, Yellowstone Discovery, Yosemite Journal, Earth Island Journal, Darling, and Inspiring Generations: 150 Years, 150 Stories in Yosemite. She is the author of the novel The Idea of Forever and the official Junior Ranger Handbook for Yosemite. Beth lives outside of Yosemite, “my north star,” with her husband, four dogs, two cats, and the mountain lions, bears, foxes, frogs, and other wildlife that frequent her NWF Certified Wildlife Habitat backyard.

One of the oldest and largest conservation groups in the country, the National Wildlife Federation with its over six million supporters nationwide is a strong voice for wildlife, dedicated to protecting wildlife and habitat and inspiring young people today to become conservation-minded adults. Visit www.nwf.org for more information.

While the number of women is increasing, females still make up less than 10 percent of the U.S. fire service 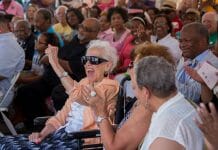 Celebrating the Life and Career of Katherine Johnson

The ‘purrfect’ music for calming cats