November 26, 2016 – An incoming low pressure system will bring rain to the valley today and snow to the Sierra this afternoon and evening.  A secondary wave will move through tonight and will bring heavy snowfall to the Sierra above 3500 ft from 10pm to 4 am Sunday.

A period of very heavy Sierra snowfall (1-2 inches/hour) expected 10 pm Saturday to 4 am Sunday. A second system moves into NorCal late Sunday night into Monday with drier conditions on Tuesday. 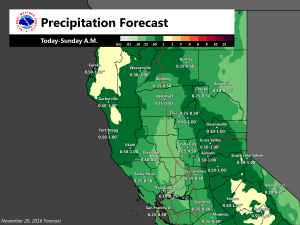 Storm system has moved into the northern California coastal counties. Expect precipitation to move across the Coastal Range this morning and spread eastward toward the Sierra by this afternoon.

The latest higher resolution models (HRRR and ARW) are showing that this first wave of precipitation could break apart as it approaches the Sierra this afternoon/evening followed by a secondary wave of precipitation during the early morning hours on Sunday. Rain and snow shifts southward by Sunday afternoon out of our CWA. With this guidance, we have lowered the snow amounts over the Sierra and adjusted snow levels. 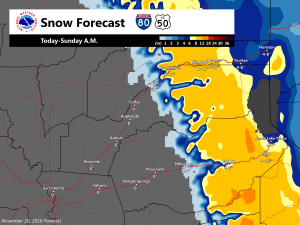 We have cancelled the Winter Storm Warning, but have kept a Snow Advisory up for Shasta County (including Burney Basin) above 3500 ft and along the Sierra above 4000 ft. Snow amounts will range around 1-4 inches between 3500 to 4500 feet with up to 8 to 12 inches at the higher elevations. We encourage Holiday motorists to check CalTrans Road Conditions before mountain travel. Motorists in the valley should be cautious of slick roads due to rain as we expect around 0.30″ to 0.50″ of rain today into Sunday afternoon.

The next wave of precipitation should move into far interior NorCal late Sunday night around 10 pm and spread southward towards central CA on Monday morning and afternoon. Snow levels should be similar between 3500 to 4500 feet, though accumulations will be lighter…around a couple of inches.

Daytime highs today into early next week will be in the 50s for the valley and 30s to 40s for higher elevations. Ridging along the west coast builds late Monday night into Tuesday bringing drier and warmer conditions.

Upper level system moving through the Pacific northwest on Wednesday may bring light precipitation to the northern zones on Wednesday but extended models not in good agreement so confidence is low during this timeframe. GFS and ECMWF dig this low into the Great Basin Thursday. Sierra remains under cyclonic flow Thursday so there is still a threat of crest showers. Most of CWA remains dry Thursday under all model scenarios with cool airmass bringing below normal high temperatures. Upper ridging over the west coast Friday and Saturday brings clearing skies with above normal temperatures expected by the end of next week.