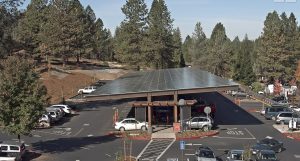 This summer the cooperatively-owned grocery store built an innovative 680-panel, 295 kW photovoltaic solar array that spans the length of an expanded parking lot. The system is expected to generate approximately 55 percent of the store’s energy needs.

Jeff Gold, the architect and designer of the project, expressed his appreciation: “This landmark project was made possible by the talent and teamwork of many community members. We hope this enhances the experience of all who shop at the Co-op.”

To commemorate the new structure, a symbolic “Flip the Switch to Solar” ceremony will be held on Monday, October 24 at 9:00 a.m. under the solar structure.

“This project demonstrates BriarPatch’s commitment to being a leader in environmental responsibility,” said Chris Maher, BriarPatch General Manager. “Reducing our dependence on nonrenewable energy is a benefit for everyone.” He added, “The fact that we did this while responding to customers’ demands for new parking spaces is a win-win all around.” The expanded lot has 45 additional parking spaces.

Nevada County designers and builders were utilized for nearly all aspects of the project.

The solar contractor for the project was California Solar Electric Company of Grass Valley. The system uses SunPower panels, the most powerful solar panels on the market, and will save BriarPatch at least $3 million in electricity costs over the first 25 years. For those interested in learning the details about the project, California Solar will be giving a guided tour of the new solar structure on Saturday, October 22 at 2:00 p.m., and tabling on the patio from 11:30 p.m. to 3:00 p.m.

The construction, which began in mid-May, was coordinated by local contractor Tru-Line Builders of Grass Valley. Tru-Line was also the contractor for the BriarPatch store building, which was completed in 2007.

“Tru-Line was incredibly accommodating in minimizing construction impacts on BriarPatch shoppers. They managed to do much of the construction work at night and in the early morning hours to avoid closing down too many spaces and to keep the lot safe for people here,” said Maher.

The solar system is currently awaiting interconnection approval from PG&E, which can take from two to eight weeks. On this schedule, the power should start running into the grid well before the end of 2017.

In addition, BriarPatch recently received a grant to install electric vehicle charging stations in its parking lot. “We’re grateful to ChargePoint and Grant Farm for their assistance with securing this grant,” said Maher.

Where: BriarPatch Co-op, in front of new solar structure

Details: Free and open to the public

What: Symbolic ‘Flip the Switch’ to Solar Ceremony

Where: BriarPatch Co-op, in front of new solar structure

Details: Free and open to the public