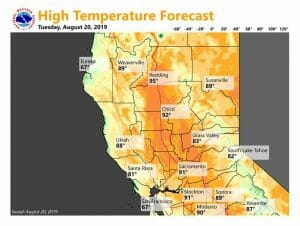 August 20, 2019 – Temperatures close to average early this week, but will return to above average for the second half of the week. Dry weather pattern continues.

Temp/dewpoint spreads in the Sacramento area of 4 deg F currently, so cannot completely rule out a little stratus. Current temperatures are similar to 24 hours ago and generally range from the mid to upper 40s in the colder mountain valleys to the upper 50s and 60s through the Central Valley. 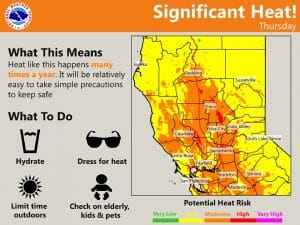 Upper trough moving through the PacNW and brushing NorCal will continue the slightly below average temperatures across the region today. Temperatures begin to warm mid-week as the trough shifts east and high pressure strengthens. High temperatures will return to around the century mark through much of the Central Valley.

The upcoming weekend will feature a building upper ridge extending from the eastern Pacific into the southwestern U.S. Recent guidance has continued to waffle about the strength and duration of the mentioned ridge which suggests some uncertainty in the temperature forecast. Fairly confident in above average temperatures for the weekend with Valley highs ranging from the upper 90s to around 105 degrees.

By the start of next week, there has been a trend in the ensemble guidance to bring an upper trough across the Pacific Northwest into the north-central states. This would lower heights a bit which ultimately keeps temperatures down a bit, although likely still near to above average.

One interesting wrinkle in the forecast is the path of the mid/upper reflection of a tropical invest over the tropical eastern Pacific. Some semblance of an upper low is seen in the 00Z GFS/ECMWF lifting this feature across 30N latitude early/mid next week.

Difficult to say if anything materializes from this system across northern California. Overall, expect temperatures around 5 to 10 degrees above climatology during the period.

Model guidance indicates a ridge building into California through the extended period, with daytime temperatures generally 5-10 degrees above seasonal normals. Forecast highs are anticipated to be mainly in the upper 90s to around 105. Deterministic ECMWF indicates much warmer temperatures compared to its ensemble mean. Meanwhile, the deterministic GFS is in much better agreement with its average. Therefore, current forecast reflects NBM temperatures given model uncertainty.