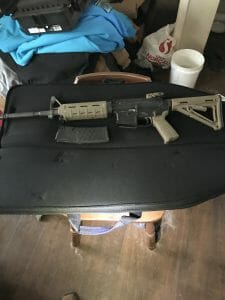 April 3, 2019 – Within the last month, the Nevada County Sheriff’s Office Special Investigations Unit (SIU) began an investigation into a resident in the 12000 block of Old Stagecoach Road in the Chicago Park area of the County of Nevada. Special agents from the Bureau of Alcohol Tobacco and Firearms (ATF) and the Department of Homeland Security (HSI) contacted our detectives and advised they had intercepted a package en route via mail to the Stagecoach Way address. Special agents told us they located enough parts to convert 15 semi-automatic handguns into automatic machine pistols. With this information, SIU detectives wrote a warrant for the address on Stagecoach and served that warrant today with the help of ATF, HSI, and detectives from Grass Valley Police Department.

Upon executing the search warrant, deputies located an operational butane honey oil (BHO) laboratory, as well as several other illegal firearms, to include at least one Glock handgun and one Smith and Wesson handgun, which had been prepared for conversion into automatic machine pistols. Detectives also located two illegally-modified AR-15 assault rifles, and enough parts to convert ten AR-15 rifles into fully-automatic rifles.

Through their investigation detectives identified John Robert Williams, 31, of Nevada County, as the party responsible for both the illegal firearms and the butane honey oil laboratory.

Mr. Williams was arrested for manufacturing controlled substances, possession of illegal weapons, and commission of a felony while armed. Mr. Williams was booked into the Nevada County Jail.