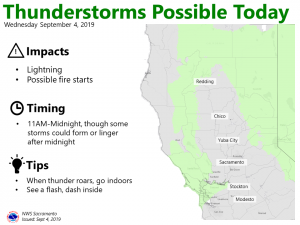 Upper flow over NorCal becoming more southerly today as an upper low over the eastern Pacific digs towards the coast. Isolated monsoon type thunderstorms formed over the Sierra just south of the CWA on Tuesday so a chance of showers or thunderstorms over the northern Sierra today looks good as upper flow shifts.

Shortwave disturbances pivoting northward in this southerly flow may bring isolated showers or thunderstorms over the coast range today as well. Moisture progs indicate that main moisture is still above 700 mb so rainfall with any thunderstorms will be limited.

RH values are expected to remain moderate and thunderstorm coverage will be limited so fire impacts should be limited as well. Not expecting a significant change in airmass today so expect daytime highs should come in similar to Tuesday with daytime highs a few to several degrees above normal.

Instability shifts northward tonight and Thursday so shower and thunderstorm threat shifts northward as well bringing a thunderstorm threat to the Shasta county mountains. This threat will continue through the day Thursday as the offshore upper low shifts to the northeast towards the Pacific Northwest. Thursday will likely see a little cooling most places but highs will still remain above normal.

Flat upper ridging returns on Friday for a temporary end to the mountain shower threat and a little more cooling. Another Pacific trough approaches the north coast on Saturday bringing daytime highs down to below normal for the first time in a quite a while. Could see a few showers over the Shasta county mountains Saturday night as this system clips through NorCal.

Troughing will bring cooler weather to the region on Sunday, in addition to isolated showers and thunderstorms over northern Sierra and Cascades. Deterministic models aren’t the most excited about this opportunity, but ensemble guidance remains persistent. At this time, we’ve opted to keep the precip chance as showers instead of thunderstorms, but as we get closer to the day there’s a chance we could see more favorable convective parameters.

Beyond Sunday and into early next week, high temperatures are forecast to be below normal.