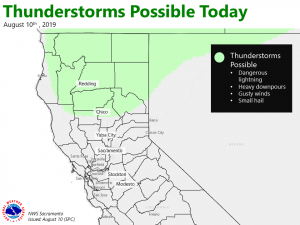 August 10, 2019 – A chance of showers and thunderstorms continues over the Coastal and Shasta mountains/foothills, and possibly over the Northern Sacramento Valley and southern Cascades through Saturday evening, then dry through the remainder of the extended period.

Cooler weather will be seen today with daytime temperatures well below normal. Warming to near normal early next week.

A deep upper low remains just off the coast of northern California early this morning bringing cooler temperatures and unsettled weather to the area. An initial shortwave ahead of this feature brought a line of thunderstorms across portions of the Coastal and Shasta mountains, including portions of the northern Sacramento Valley and the city of Redding. 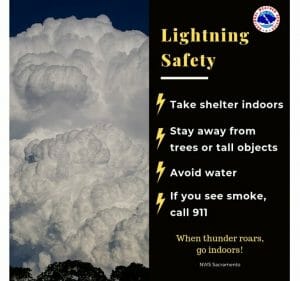 These thunderstorms produced frequent lightning, heavy rain, gusty winds, and hail before moving north of the area. The Redding Airport reported 0.90 inches of rain as storms moved through, setting a new daily record for this location.

Additional showers and storms are expected today as the closed low moves onshore and begins to lift northeast across NorCal. The best location for storms remains the same as previous forecasts which is along and north of Lake County to Red Bluff to Quincy, although some isolated showers may pop up a bit further south than this.

CAM guidance suggests storms will continue across the Coastal/Shasta mountains and foothills and northern Sacramento Valley before shifting eastward to areas near the southern Cascades in the afternoon and evening.

PWATs range from 0.75 to just over an inch which may lead to some heavy rains occurring with thunderstorms. The closed low transitions to an open wave late afternoon and lifts north and east of the area Saturday evening, ending any chances for precipitation. 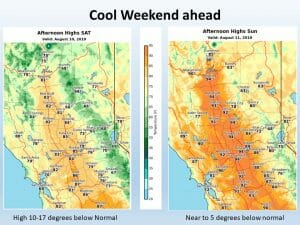 Temperatures today will be quite cool in comparison to climatology, with Valley highs only reaching into the low and mid- 80s. Persistent cloud cover in the northern Sacramento Valley will keep temperatures cooler than in the southern portion, where the marine layer is expected to erode by late morning. Temperatures will increase Sunday as flow becomes more zonal, with temperatures returning to slightly above average by early next week.

A gradual cooling trend is expected across interior northern California later next week as a rather amplified trough digs down from British Columbia. While individual forecast models vary in placement and amplitude, there is a fairly high signal in the ensemble guidance of this feature.

Consequently, temperatures will gradually begin to decrease to slightly below average later in the week. Overall impacts beyond cooler temperatures are unknown at this juncture, but details including thunderstorm chances will become more apparent in future forecasts.