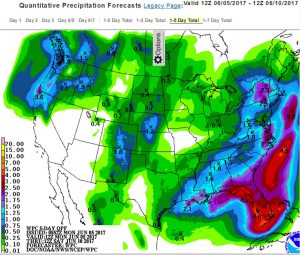 June 5, 2017 – Warm and dry weather through the middle of the week. Cooler with a chance of showers for the latter half of the week.

Standardized anomaly table shows seasonable 5H heights over Norcal to the start of the work week as the high pressure ridge axis has shifted Ewd, from the Desert SW and across the Rockies. Broad SW flow on the backside of the ridge and ahead of a progressive trof approaching 140W will result in a couple more warm days for interior Norcal with max temps some 5-10 degrees above normal over the CWA today and Tue before trending lower on Wed. Weak ripples in the SW flow ahead of the main trof will spread some high level clouds over the CWA at times.

On Wed, the aforementioned trof is forecast to move inside 130W which should initiate a cooling trend. The increasing onshore flow could advect marine stratus inland, mainly during the morning hours. Could agreement in the GFS/ECMWF raises confidence in a cool wet pattern developing over Norcal on Thu and through the end of the week.

The frontal band is forecast to move across our CWA on Thu with precip chances over most of the CWA, to be followed by the upper trof axis on Fri which will keep showers going over the CWA, especially over the higher terrain. Given the current QPFs, this could be one of the wettest June 8ths for a few locales. A half inch of rain in the RDD area would make it the 2nd or 3rd wettest, and a quarter inch at DTS would make it the 2nd wettest.

Thunder chances look limited on Thu at this time as the thermally indirect circulation of the upper jet remains NW of our CWA. This could change later in the week as the colder trof axis moves over the region with mid level CAA steepening lapse rates, and in addition to orographic effects.

The trough axis moves into the Great Basin on Saturday, but cyclonic flow may still generate isolated thunderstorms over the northern mountains and adjacent Valley. Temperature increases and humidity decreases Sunday and Monday as ridging builds.