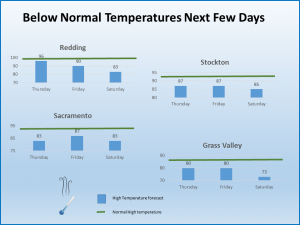 August 8, 2019 – Continued cooling trend through Saturday with daytime temperatures dropping to 10 to 15 degrees below normal. Warming to above normal early next week.

Slight chance of thunderstorms over the higher Sierra Nevada this afternoon. Threat of showers and thunderstorms increases over the Coastal and Shasta mountains/ foothills, and possibly over the Northern Sacramento Valley Friday and Saturday.

High pressure ridge over the western U.S. with a closed low off the northern California coast. Currently seeing a fairly strong delta breeze this morning but marine layer is squashed down to below 1000 feet so only patchy stratus is expected into the delta this morning. Southerly flow aloft will bring subtropical moisture northward up the Sierra but for the most part any significant convection will remain east of the Sierra crest.

A few showers or thunderstorms may clip the far southeast CWA and have included some crest thunderstorms over the Northern Sierra this afternoon. Overall airmass cooling, as the offshore low edges toward the coast, will drop daytime highs today to a few degrees below normal and about 10 degrees below normal near the delta where the delta breeze will have more influence. 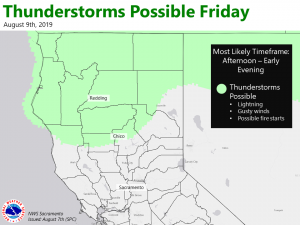 More cooling is expected on Friday as the offshore low starts to push on to the coast. Upper level diffluence and instability will bring a threat of showers or isolated thunderstorms to the northern coast range by the afternoon hours.

This upper low is forecast to slowly open and move into the Pacific Northwest and NorCal Friday night through Saturday.

Models are fairly consistent in bringing a threat of showers or thunderstorms north of about a line from Lake county to Red Bluff to Chester during the day on Saturday. Otherwise, still more cooling is expected on Saturday with daytime highs expected to range from 10 to 15 degrees below normal.

The upper trough shifts east of the region on Sunday with flat ridging returning over the state. Daytime highs warm quickly on Sunday reaching to just above normal Sunday afternoon.

Upper level flow begins to become more zonal Monday over northern California as troughing moves east of the area. High temperatures heat up into the upper 90s across the Valley Monday afternoon, with mountain highs in the 70s.

High pressure expands into the area Tuesday ramping up temperature a couple more degrees. Ensemble guidance indicates troughing returning to the west coast by Thursday, which will bring temperatures back down to near normal. Dry weather is expected next week.