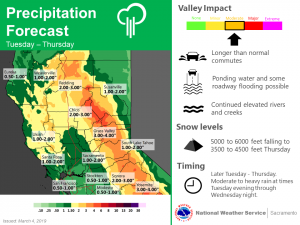 Plenty of low-level moisture lingers across the region early this morning with satellite imagery indicating lots of cloud cover with bases around 5-6k msl. Cyclonic flow aloft continues to lift this airmass, squeezing out a few light showers with the snow level around 6k ft. While there was some brief fog earlier in the night up in Redding, the extensive cloud cover will precludes much fog development early this morning. Current temperatures remain mild, ranging from the 30s in the mountains to the lower 50s across the Central Valley.

Drier weather weather expected across much of the region today, but a few light showers will linger across mainly the mountains, and mainly this morning, as cyclonic flow weakens. By this afternoon, weak short-wave ridging will be moving overhead.

Satellite imagery shows next extra-tropical cyclone to impact interior NorCal is currently centered west of 140W and north of 30N. To the southeast of this system, the warm conveyor belt is drawing moisture northeastward toward California. GEFS/GFS Integrated Water Vapor Transport indicates this moisture entraining into the storm, but bulk of this higher PW air will be shunted into the southern half of the state. 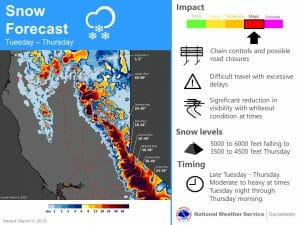 A period of moderate to heavy precipitation expected over interior NorCal Tuesday night through Wednesday with heavy snow continuing over the mountains into early Thursday. Several feet of snow expected in the mountains with snow levels 4000 to 6500 feet, lowering into the foothills Thursday night into Friday as precip winds down. Winter Storm Watch and SPS have been issued to highlight upcoming event.

Main trough with embedded short waves will keep wet weather in the forecast through Friday. Rainfall amounts Tuesday through Friday look to be around 1 to 2 inches for the Central Valley and 2 to 6 inches for the foothills and mountains. With already saturated soils, additional rain may increase potential for urban and small stream flooding along with main stem river points.

A complex array of low-amplitude shortwaves over the Pacific will continue to take aim at the West Coast during the period. Given the short wavelength between each feature, multiple weak to modest systems will impact the region one way or another. However, these regimes also can be difficult to forecast several days out which suggests details will change from day to day. With that in mind, one such system will be dipping through Southern California on Friday morning with some lingering showers in play to conclude the work week.

Eventually the focus shifts toward a more amplified longwave trough which approaches the coast by Sunday. Current forecast guidance suggests this system will dig down toward 30N latitude which parallels northern Baja California where it eventually closes off. This scenario would keep impacts minimal except for scattered shower chances each day. The 00Z GEFS mean follows this notion with only 0.25″ of rainfall from Friday into early next week around Sacramento. Snow levels are on the lower side, generally between 3,000-3,500 feet if precipitation were to fall. Overall temperatures are expected to remain below average with readings around 5 to 10 degrees below what one would expect for early March.