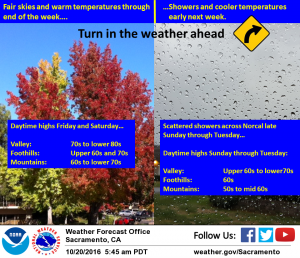 High pressure over the southwest U.S. will keep clouds and precipitation north of the state with just a little warming expected most areas today. A light northerly surface gradient will bring light north winds under the ridge. An upper trough digging into the eastern Pacific will bring a turn to more onshore flow and a slight cooling on Friday.

This cooling trend continues on Saturday as the upper trough deepens offshore with daytime highs dropping to below normal. The higher elevations will see increasing southwest winds.

Sunday starts out dry but forecast models bring a frontal band into northwest California by afternoon. Models are in fairly good agreement in bringing precipitation into the northern Sacramento valley by 06z Monday. Increasing southwest winds and cooler temperatures will also result as this frontal band moves inland with daytime highs Sunday about 10 degrees below normal. Light precipitation will spread over the north end of the state Sunday night mainly north of about interstate 80. Precipitation amounts will be light with heavier rainfall having to wait until later in the week.

Active weather looks on track for next week as forecast models continue to be in alignment with an upper level low positioned in the eastern Pacific. The position of the upper level jet stream will pool moisture into northern California to bring increased chances for rain, especially for the northern mountains and northern Sacramento valley. A general lack of instability will not allow for thunderstorm development.

Snow levels are expected to remain above 6500 feet, so some mountain passes in the northern mountains could receive some light snow accumulations next week. Otherwise, the highest elevations of the mountains could receive heavier accumulations. High temperatures will generally be about 5 to 10 degrees below normal next week in the 50s and 60s as a result of the weather system continuing to remain over the west.