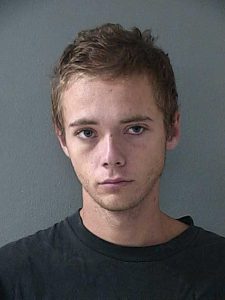 On 10/24/2016, Grass Valley Police Officers arrested Aaron Herbert
(18 years old), for making criminal threats against law enforcement, resisting arrest, and charges related to theft and possession of stolen property. There were no reported injuries to anyone involved in this incident.

At just before 7:00pm, the Nevada County Regional Dispatch Center received a telephone call from a business employee in the 1000 block of Sutton Way. The reporting party informed dispatch that a white male adult was inside his business acting strangely and refusing to leave.

Officers began responding and received updated information that the employee had fled the business and felt the male was possibly armed with a firearm. Prior to fleeing, the employee also heard the man stating he would kill law enforcement who responded to the scene.

Grass Valley Police Officers and Detectives, with assistance from the Nevada City Police Department and Nevada County Sheriff’s Office, arrived in the area and established a perimeter around the involved business. Neighboring businesses were evacuated without incident. Officers subsequently used a Public Address (PA) system to call to Herbert and requested he come out with his hands in the air. After numerous PA calls, Herbert exited the front door of the business and was taken into custody after minimal resistance. Evacuation orders were lifted just before 8:00pm.

As a precaution, Herbert was transported to the Sierra Nevada Memorial Hospital where he was evaluated and medically cleared for booking into jail. His threats to law enforcement and the public however, resulted in a Mental Health detention and further evaluation. Upon his release from the hospital, Herbert will face the following criminal charges: PC§ 69-Assault/Threats of grave bodily harm to law enforcement, PC § 148- Resisting Arrest, PC § 490.2- Petty theft, PC § 496- possession of stolen property, PC § 602.5- Trespassing in a commercial business.

The Grass Valley Police Department thanks those who provided information, and cooperated with evacuations as requested. Further information related to Herbert’s pending criminal charges will be made available upon his booking.

Herbert is believed to be homeless and living in the Grass Valley area. Since the beginning of 2016, Herbert has had numerous contacts with the Grass Valley Police Department, including multiple arrests. Grass Valley Police records show three arrests for prowling since April of 2016. He was also the suspect of an unrelated theft from a Brunswick Basis business earlier in the day on 10/24/2016.