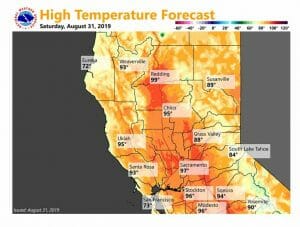 August 31, 2019 – Hot and dry weather continues through next week as temperatures will be slightly above average. Monsoonal moisture may enter the region by the middle/latter part of next week.

Relative to the same time yesterday, most locations are reporting slightly warmer readings per surface observations and RTMA data. This is in response to a weakening of the Delta breeze as indicated by local wind fields. Relative to climatology, many sites can expect morning lows close to average for late August outside of the milder thermal belts (i.e., foothills).

Given the region is along the northern extent of a southwestern U.S. ridge, warm/dry conditions will prevail throughout the Labor Day holiday weekend. Strong subsidence within the air column should encourage nearly cloudless skies outside of a few passing high cirrus. Valley highs in the mid to upper 90s will be the norm with 70s being more commonplace over the mountains.

Moving to the first half of next week, the mentioned ridge should continue to influence the region’s weather through at least Tuesday. However, the effects of an offshore longwave trough may reduce temperatures by a couple degrees. As the system gets closer to the coast, some additional cloud cover is likely which brings highs down to the low to mid 90s by Wednesday. Will need to monitor the threat for scattered convection across the Sierra as the trough could interact with a modest monsoonal moisture surge.

GEFS ensembles show general area of troughing over the eastern Pacific with ridging over the interior West later next week. Pattern is favorable for importing moisture from the south with diurnal thunderstorms possible over the Sierra. Temperatures will still be a little above average during the middle of next week, but are expected to cool to around average by next weekend.