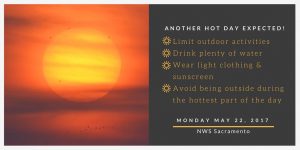 May 22, 2017 – NorCal’s first triple digit heat of the season will continue for portions of the Central Valley today and Tuesday. Cooler temperatures return beginning mid-week. Isolated late day thunderstorms possible over the mountains Tuesday and Wednesday.

Streaks of high clouds continue to spill over the eastern Pacific ridge into NorCal early this morning, otherwise skies are clear. Current temperatures are very mild ranging from the upper 30s and 40s in the colder mountain valleys, 50s and lower 60s elsewhere in the mountains, to the 60s to mid 70s elsewhere.

The marine layer has deepened to around 1K feet at Fort Ord which has led to a Delta trickle at Travis AFB, but the cooling doesn’t extend very far inland as both Sacramento and Stockton are still in the mid 60s.

High pressure will continue to build today and Tuesday. The warmest day this week for the Sacramento region will likely be today as the Delta Breeze is expected to pick up steam on Tuesday. Further inland, the peak of the heat is expected Tuesday as the ridge moves overhead.

The airmass over interior NorCal is forecast to remain too stable today for any deep convection, though more cumulus will be possible in the northern Sierra Nevada. A better chance for an isolated thunderstorm or two over the Sierra south of Lake Tahoe will be possible late Tuesday afternoon.

Increased onshore flow ahead of the approaching trough along with synoptic cooling will lead to cooling across the region on Wednesday. A few late day thunderstorms will be possible across the northern mountains Wednesday as the upper trough and cold front move across the far northern portion of California.

The cool down continues Thursday as the trough lingers over NorCal.

Troughing over the area on Friday will lead to cooler temperatures, especially near the Delta with onshore flow. Ridging builds back in for Memorial Day weekend with warming temperatures. Continued onshore flow will keep Delta and southern Sac Valley noticeably cooler than the northern Sac Valley where afternoon highs will top out in the mid to upper 90s. Enough instability around with weak disturbances in the flow to warrant the chance for showers and thunderstorms across the mountains, but valley should remain dry.

Two New Nevada County Landmarks Designated by Board of Supervisors