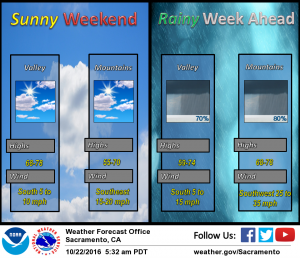 October 22, 2016 – Cooling trend this weekend with a chance of precipitation spreading over the forecast area Monday through next week as an upper level disturbance approaches northern California.

A trough of low pressure will deepen along the west coast this weekend. The interior is expected to stay dry but gradually become cooler each day. Currently the models show the earliest any rain near our area will be Monday morning and some areas may not get any rain. The best chances look to be along the northern coastal range and over the northern half of the Sacramento valley and mountains. Rainfall amounts and timing continues to be an issue.

The system may get stretched out over the region and weaken as it tries to move onshore. No major impacts are expected with this storm but it may bring some snow below the major pass levels in the Sierra Nevada.

Models differ on timing of waves lifting out of the persistent trough over the eastern Pacific into NorCal later next week, and how much entrainment of deeper moisture from the south will occur, as the ECMWF is generally wetter. Will leave POPS generally in the chance category until better timing resolution develops.