NEVADA CITY, Calif. March 4, 2015 – On March 4, 1965 a young woman started a temp job as a typist for the Tahoe National Forest. The assignment was to last for three weeks. Fifty years later, Lead Information Assistant Patti Mahaffey is celebrating half a century with the Forest Service.

The front desk person at the time got married and Patti was offered the job. She was reluctant to take the position because, “I felt I was too shy to talk to people all day long.” But, she accepted and has been ruling the front desk ever since. “It’s been a really long three weeks,” Patti joked on Tuesday.

Mahaffey started work on a plug-in switchboard, a manual typewriter and lots of paper files and a rolodex. These days, the switchboard is electronic, the computer is (mostly) updated and paperwork is still plentiful. For years, Patti’s voice was heard on local and regional radio stations, giving the recreation report to listeners far and wide. Her cheerful demeanor hasn’t changed, every visitor to the front desk is greeted with a smile. As the primary point of contact for many members of the public, Patti loves her job which she describes as “helping people and representing the forest.”

No matter if you want to sign up for a woodcutting permit, need a trail map or want to spend a weekend in a campground, Patti is your best resource. Over the years, she had to answer some peculiar questions. No, campgrounds do not have street addresses or street lamps. Sorry, you can’t have a pizza delivered to a wilderness area and your chances of finding a Starbucks near a trailhead are nonexistent.

During her tenure Patti has worked in the three different locations of the Tahoe’s headquarters; in downtown Nevada City, the tin sheds at the entrance of the Commercial Street parking lot, the Banner mountain location and finally the current headquarter on Coyote Street. Seven Forest Supervisors have led the agency during that time, starting with Hank Branagh (1958-1972), Robert Allison (1972-1975,) Robert Lancaster (1976-1984), Geri Bergen (1985-1990), John Skinner (1990-1998), Steve Eubanks (1998-2008) and finally Tom Quinn.

Geri Bergen, the first woman to be selected as a Forest Supervisor in the U.S., remembers Patti vividly: “In 1967, when I first went to work in the Forest Service Regional Office, Patti Mahaffey was the cheerful voice of the Tahoe when I phoned the Forest. She was there when I transferred to the Tahoe in 1978 and when I left in 1990. And now in her 50th year of service, Patti is still providing competent, cheerful advice and answers for the public in the front office. She has been part of the Tahoe’s personality all this time, and deserves great commendation for her years of faithful, quality service.”

Steve Eubanks joins in complimenting Mahaffey, saying, “I consider Forest Service front desk people to be really important. They are the only Forest Service employees that many members of the public ever meet. So it’s important that they be friendly, knowledgeable, and experienced so they can provide both valuable help and a good image of the agency. Patti exemplifies those characteristics. She has a great personality that provides every visitor with the feeling of being welcome–and then she provides excellent information based on her extensive experience and understanding of the forest and the agency. It’s a credit to Patti that she has had those characteristics for her whole career–she’s a real asset!”

Judi Tartaglia, who retired as the Tahoe’s Deputy Supervisor a few years ago, agrees: “Patti is a true professional. She is thoughtful, a virtual library of information about the Tahoe and adjacent National Forests, and has a great sense of humor. She attends to the needs of all members of the public who come in thru the front door whether they are cheerful or antagonistic. Patti’s wealth of knowledge about the TNF organization and employees is extremely useful when customers walk in with a question and need to be guided to a Forest Service resource for answers. I could always count on Patti during my career!”

Former Public Affairs Officer Ann Westling, which our readers may recognize as the author of the Happy Wanderer columns, worked with Patti for over thirty years. “Patti is the best receptionist I have ever worked with and perhaps the best receptionist in the entire National Forest System and probably the Federal government. She is very professional while being kind, friendly, and very focused on providing the best public service possible. She takes her job seriously while putting the needs of the public first. It would take books to record all the public compliments she has received over the years for her ability to answer questions or knowing who to transfer them to for the best answer to their concern. She is very welcoming and very courteous even when the public is angry or upset. Often, people would come to the Forest Headquarters to ask her a non-Forest Service related question because they did not know who to ask but knew that Patti would help them figure it out. She has trained a zillion young, often newly hired employees on how to give the best customer service, demonstrating how to go beyond what customers are asking for. And she always has a wonderful, positive and cheery outlook. She has been a delight to work with for 33 years!” 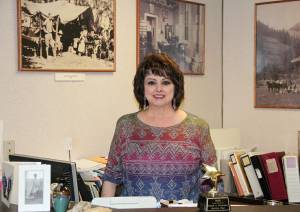 Mahaffey is known on the TNF for her sense of humor, being the den mother to the employees and of course, her shoes. A persistent rumor has it that Patti is the only person in the whole agency exempt from wearing the standard Forest Service uniform. The tradition apparently began at the end of Hank Branagh’s tenure and has continued since. This has enabled Mahaffey to indulge in her shoe collection, approximately 300 pairs of stilettos, and one pair of tennis shoes.

Patti does not like flying. She recalls one instance of flying over the TNF in a small spotter plane and has no desire to repeat the experience.

A long list of pranks and celebrations is credited to her, but has to remain off the record – the list is too long and “either you list them all or none.” If you see Patti in Nevada City, just ask her for a few examples.

A Nevada City native, Mahaffey was born on Coyote Street, the same street where the current Forest Supervisor’s offices are now located. Married for 47 years to her husband Dennis, she is the very proud mom of Michele and her son-in-law Chris. Rounding out the Mahaffey clan are puppy Jazzy and kitty Miki.

Editor’s note: Thank you Patti, for 50 years of true service to the public!