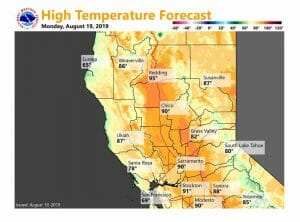 August 19, 2019 – Temperatures close to average early this week will return to above average for the second half of the week. Dry weather pattern continues.

Clear skies cover the region early this morning other than some stratus nosing into the west Delta from the Carquinez Strait. Current temperatures range from the mid to upper 40s in the colder mountain valleys to the upper 50s and 60s across the Central Valley.

Very weak trough lingers across the region early this week maintaining temperatures close to average for mid-August with light to moderate onshore flow. Short-wave forecast to brush by to the north on Wednesday, then high pressure will strengthen and northerly flow develop in its wake leading to a return of above average temperatures across the region.

To conclude the work week, mid-level heights will rebound after the passage of a longwave trough to the north. Gradual height rises are to continue into the weekend as an expansive upper ridge takes shape over the southwestern U.S.

At this point, it is safe to say temperatures will remain above average from Friday through the weekend and into the start of next week. Current forecast highs support readings near, to slightly above the 100 degree mark in the Valleys while 80s can be found in the mountains. These numbers equate to roughly 5 to 10 degrees above climatology. Given some of the more robust ECMWF solutions, there may be room to raise these numbers.