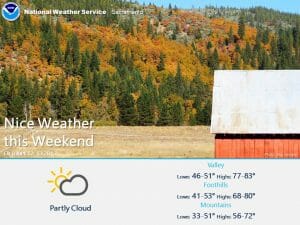 A short wave ridge will be pushing to the east as troughing begins to set up over the west this weekend. No rain is expected with this troughing but some clouds are forecasted mainly later in the day today into Sunday. Upper level ridge will begin to build back into the area later Monday into Tuesday.

Chilly low temperatures are expected this morning across NorCal with them running about 5-10 degrees below average. Overnight lows tonight and Sunday night should be a bit warmer given the cloud cover. Highs will be right near normal the next few days.

Upper ridge of high pressure over the west coast begins breaking down on Wednesday with mid range models in good agreement in bringing an eastern Pacific upper low pressure system towards the Pacific Northwest coast. GFS and ECMWF agree on bringing a weak cold frontal band into the north coast on Wednesday with some light precipitation possible along the coast range and western Shasta county mountains.

The remainder of the forecast area will likely see at least a slight cooling trend. Models diverge on Thursday on depth and timing of this shortwave system with a large ensemble spread not being very helpful. Have gone with a middle of the road approach keeping light precipitation mainly over the northern mountains and most other areas seeing a little more cooling. Upper troughing over the northwest U.S. will keep precipitation chances over the northern mountains on Friday with continued well below normal daytime highs.

Long range models in decent agreement in rebuilding upper ridging over the west coast going in to next weekend. Transition from trough to ridge will bring another round breezy north winds early next weekend.