A strong upper ridge centered over the east-central Pacific continues to dominate the weather pattern across interior Northern CA. Northerly winds have diminished a bit as compared to yesterday for Valley locations, but have begun to ramp up early this morning along the Coastal Range and NE-SW oriented Sierra canyons. These north winds have kept some locations well-mixed: the northern Valley and mountain thermal belts are still in the 80s as of this writing. The Delta Breeze has been strengthening overnight, with marine stratus increasing in coverage across the Bay Area. This trend should continue today and bring relief from the heat to areas adjacent to the Delta, including Sacramento. 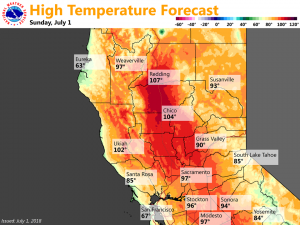 Locales farther away from the Delta won’t be so lucky: temperatures will again reach 100 degrees or greater across the Sac Valley from Yuba City northward, with 106-108 temperatures projected near Redding. These locations will also encounter locally breezy north winds this morning, then diminishing toward the afternoon.

As such, critical fire weather conditions will likely continue through much of today for those more wind-prone locations. The east-central Pacific ridge will retrograde this week as a Gulf of Alaska trough deepens into the Pacific Northwest. This will promote synoptic cooling across the region, along with an enhanced Delta Breeze. Look for Valley high temperatures to be in the 90s to lower 100s on Monday. Temperatures will be within a few degrees of normal on Tuesday, then below normal by Wednesday.

A dry, cooler pattern with southwest flow aloft is expected through the latter half of next week. A trough will be over the west coast and temperatures will be below average at mid-week warming to a little above average next weekend. Locally breezy southwest winds expected at times, especially over the mountains and near the Delta.