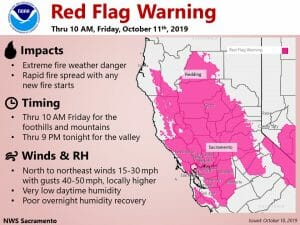 October 10, 2019 – Extreme fire weather conditions are expected into Friday due to dry conditions and gusty winds. A little milder temperatures expected into next week. Red Flag Warning until 10 AM Friday, Wind Advisory until 6 PM this evening.

Satellite imagery indicates strong subsidence (darkening on water vapor) over NorCal on the backside of the trough as it closes off over the northern Rockies. The MFR-SAC gradient has been holding close to 12 mbs for the past 24 hours, but the RNO-SAC gradient has increased significantly overnight and is now over 10 mbs.

Northerly wind gusts of 30-45 mph continue along the western edge of the Sacramento Valley into portions of the Coast Range, while northeast to east winds of 40-50 mph have increased across the northern Sierra Nevada. KDAX VWP presently indicating 50 kt winds at 1k ft and 60 kts at 2k ft. The airmass across the area is very dry with current humidities only in the teens to around 30 percent.

Gradients will begin to relax later this morning, and winds will gradually weaken this afternoon. Enough easterly gradient lingers into early Friday for locally breezy conditions in the northern Sierra. 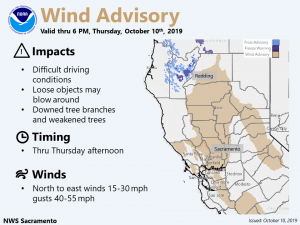 Lighter winds and milder temperatures expected to dominate the weather Friday through the weekend.

EPAC upper ridging progged over NorCal Monday into Tuesday of next week for initially dry weather through early part of the extended period. High temperatures forecast to be slightly below normal during this period. Pacific frontal system looks to approach the area Wednesday with some increasing clouds, then move inland Thursday spreading precipitation across much of the CWA. Attm it appears this storm will produce mainly light to moderate QPF with snow levels remaining generally above pass levels.