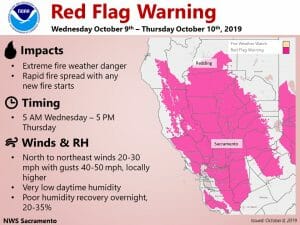 October 9, 2019 – Much cooler today and Thursday with gusty dry, northerly winds. Temperatures moderate to around average by the end of the week. Red Flag Warning until 5 PM Thursday, Wind Advisory until noon PDT Thursday.

Satellite imagery shows clear skies across the region early this morning as the trough settles in and high clouds associated with the upper level front have shifted well to the south of the area. The north-south pressure gradient has been steadily increasing since Tuesday afternoon and the MFR-SAC gradient is now up to 12.5 mbs. The RDD-SAC gradient has increased to 2.5 mbs in the past couple of hours, and we`re now beginning to see some northerly wind gusts in the 15-30 mph range across the northern Sacramento Valley and surrounding foothills (KDAX VWP now indicating north winds up to 35 kts at 2k ft). 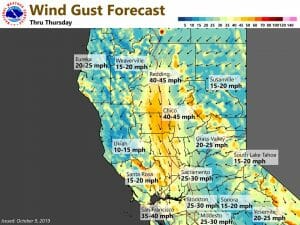 Winds will increase this morning as mixing develops and subsidence increases across NorCal as the trough shifts east into the Great Basin (water vapor imagery is already showing a large area of darkening off the Oregon coast dropping southward). HRRR still showing a big increase in wind across the Sacramento Valley in the 0800-1000 PDT time range as sustained winds increase to 20-30 mph with gusts of 40-50 mph. Needless to say, combined with low humidities (daytime minimums in the single digits and teens with only minor nighttime recovery), fire danger will be critical to extreme.

Winds will increase later this afternoon, and especially tonight, in the northern Sierra and foothills as the easterly pressure gradient increases (RNO-SAC forecast to reach 12 mbs tonight). Winds will slacken a bit along the eastern edge of the Sacramento Valley, but will likely increase along the western edge of the valley and across the higher elevations of Lake County.

If comparing meteorological setups, this has a lot in common with the October 2017 event which sparked the north Bay Area wildfires. Current fuels are running near seasonal values across the Valley while being drier farther west toward the Coastal Range and foothills. Remember to have a plan if a fire starts near you.

Pressure gradients forecast to relax considerably by midday Thursday, but enough easterly gradient lingers to continue locally breezy east winds in the northern Sierra into early Friday. Lighter winds and milder temperatures expected to dominate the weather at the end of the week.

Weak upper trough moves through NorCal Sunday with little associated moisture and affect on our weather. EPAC upper ridging follows wave for Monday into Tuesday with daytime max temperatures near to slightly below normal. Frontal system may approach the area towards the middle of next week with some precipitation possible over the Coastal Range and northern portions of the CWA.