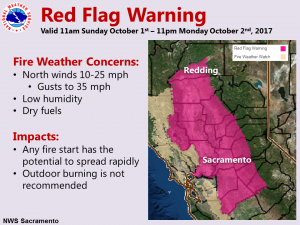 September 30, 2017 – Cooler weather with breezy north winds into next week. Precipitation chances will likely remain north of the area. Red Flag Warning from 11 AM Sunday to 11 PM Monday.

Sunny across most of the area this morning, with the exception of a small patch of low stratus over eastern Yolo/western Sacramento counties. Satellite shows this patch moving southward through western Sacramento/Davis into the Delta area.

Confidence has improved in the potential for critical fire weather conditions on Sunday. The Fire Weather Watch has been upgraded to a Red Flag Warning with an expanded area for the Valley, adjacent foothills, and Delta. The time has been extended into Monday, as Monday looks even windier, with little improvement in relative humidity. A Wind Advisory may be warranted as well, and be considered for Sunday-Monday.

Temperatures today are starting a little cooler, but highs are expected to be similar to be about the same as on Friday.

Trough of low pressure over the west will bring cooler conditions with temperatures slightly below normal for early October. Although there is a remote chance for a stray mountain shower, the weather pattern is expected to be dry with mostly clear skies across interior northern California. Breezy conditions are expected each afternoon from mid to late week as the pressure gradient across the valley strengthens between the high pressure in the Pacific and the low pressure in the valley.