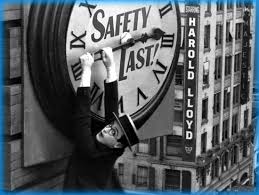 July 18, 2019 – Nationally acclaimed theater organist Walt Strony performs music of the period for this 1923 silent film, considered one of cinema’s greats. “Safety Last” stars Harold Lloyd, a young man who ventures to New York City and lands a job in a department store, spurred by love for his girlfriend, played by Mildred Davis.

Watch for the iconic scene in which Lloyd dangles from a clock face. He appears to be several stories above the streets of New York! Film critic Roger Ebert called it “the most famous shot in silent comedy.”

Admission is by donation. A free wine-and-cheese reception follows the film. This is a production of Arts @ PEACE, the church’s program of high-quality cultural events offered to the whole community.

Strony will perform on his own Walt Strony Signature Series four-manual organ – that means four levels of keyboards – on loan to Peace. All donations benefit the Peace Organ Fund. The church is raising money to replace its own aging instrument, which is essentially a 30-year-old computer. Organizers envision a new organ capable of playing real pipes! Strony’s masterful performance offers an idea of what the church’s space – used by several secular community organizations – could sound like when filled with the thrilling vibration of a pipe organ.

Lloyd ranked with Charlie Chaplin and Buster Keaton as one of the three comic geniuses of the silent era, Strony said. Lloyd was known for using a mixture of slapstick and suspense to put audiences on the edge of their seats.

Part of the appeal of Lloyd’s characters – unlike Chaplin and Keaton – is their very ordinariness, wrote Ebert. Lloyd’s on-screen character often is referred to as “Glasses,” in reference to the spectacles he wears.

The iconic scene in “Safety Last” in which Glasses climbs a tall building and dangles from the clock face was achieved with a series of ground-breaking visual tricks, according to Turner Classic Movies. Directors Fred C. Newmeyer and Sam Taylor had several fake facades built to look like the same building at different heights. Lloyd climbs the facades, but it appears he is climbing a single, tall building.

“Although Lloyd performed most of his own stunts, a double was used in long shots, and a circus performer was used in the scene in which he dangles from a rope,” according to TCM’s online Archival Materials.

The film’s story has Glasses climbing the building in a bid to draw customers into the department store and win $1,000 for doing so.

“The Glasses character in ‘Safety Last’ would have blended with the background of the department store where he worked if it had not been for action imposed upon him,” Ebert wrote. “But what action!”

“Safety Last” is on the National Film Registry of the Library of Congress.

Cost: By donation – 100% of donations benefit the PEACE Organ Fund