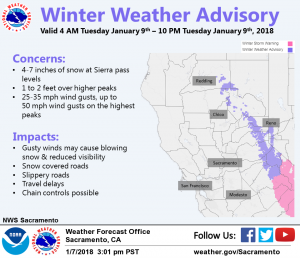 January 9, 2018 – Widespread precipitation will taper off to showers today as the low pressure system moves into SoCal. Accumulating snow will be limited to the just the highest elevations. Threat of light showers continues over the mountains into Friday, otherwise drier beyond mid-week with some night and morning valley fog.

Closed low and deeper moisture now to our south headed into SoCal. Radar shows areas of moderate precipitation continuing across interior NorCal, but less extensive than earlier tonight. 6 hour rain amounts are still above an inch from Butte County southward through the Sacramento region where low-level convergence has remained focused. The Downtown Sacramento site is now over 3 inches for the past 24 hours. Will continue the flood advisory for urban and small stream flooding into mid-morning.

Wrap-around precip will continue today mainly from about I-80 southward with scattered showers further north. Snow levels are still around 8K feet or above, but may lower a bit later today. Accumulations will likely be limited to the highest terrain in the Sierra south of Tahoe and over Mt Lassen.

Weak systems may keep a threat of some light precipitation over mainly the northern mountains Wednesday and Thursday, otherwise drier weather expected as upper ridging builds over California. Night and morning valley fog will be possible.

Upper level ridge over the west coast will bring fair skies and above normal temperatures. Morning valley fog is the main issue, with night time inversions and wet ground. A turn to a wetter pattern looking more likely early next week as a Pacific low approaches the Pacific Northwest and northern California. Much of the northern CWA will see a chance of rain by Monday night with a little cooler temperatures during the day assuming the ECMWF is on track. The GFS however is somewhat more shallow with the incoming system which would bring precipitation only south as far as about the Redding area. Snow levels currently forecast to start out above pass levels, dropping a bit on Tuesday. Confidence in the forecast for early next week remains somewhat low due to lack of coordination between models and adjustments to the forecast for this time period are likely.