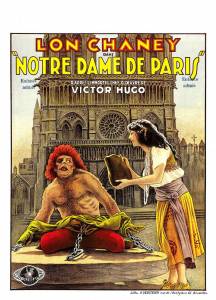 Silent Movies with Walt Strony presents “Hunchback” for free at Peace Lutheran Church, 828 W. Main St., near downtown Grass Valley. A free wine-and-cheese reception follows. It’s a production of Arts @ PEACE, the church’s offering of high-quality cultural events. Peace is raising money to buy a new organ for the church sanctuary, and any donations will be accepted gratefully.

“This is perhaps Lon Chaney’s best film, in terms of his acting,” said Strony, who performs at film festivals across the nation. And the story speaks to us today: of being different, of persecution, of love, hope and heroism.

Strony will perform original compositions as part of the score he has assembled to evoke the action and emotions viewers see on the screen. One original work is the theme Strony plays when the deformed Quasimodo makes his appearance ringing the great bells of the Notre Dame Cathedral in Paris. “I couldn’t think of anything already written that would work for this, so I wrote my own,” he explained.

Strony’s score also features French, Romantic-era composers including Camille Saint-Saëns and Cesar Franck. “I like to use music of French composers that would portray the spirit of the time,” Strony said.

And, “since the film is set in 1482, I’ll also include much earlier music that sets the tone for the era,” he added

For the first time in Peace’s “Silent Movies with Walt Strony” series, Strony will perform on his own, personal instrument – part of his signature line of organs. “I designed this organ for the Allen Organ Co.” Strony said. “It’s the only one in California of its type.” This performance offers a taste of the sound that could be produced in the Peace sanctuary with a modern digital-pipe instrument.

Strony’s goal, he added, is to recreate the experience of watching silent movies the way they were originally intended. For that reason, listeners won’t hear music from the 1996 Disney movie or the 1999 stage musical.

The 1923 film was produced by Carl Laemmle and Irving Thalberg, and shot at Laemmle’s Universal Studios in Hollywood. It takes its story from Victor Hugo’s 1831 novel of the same name.

The story relates Quasimodo’s suffering and transformation when falls in love with the kind and free-spirited Esmeralda. A three-way competition for Esmeralda’s affection unfolds against the backdrop of a beggar army, an evil cathedral manager, his saintly brother, a dashing captain, a festive ball and an attack on the cathedral. But the story ends in tragedy.

“This is not a film for young children,” Strony advised.

More than $20,000 has been raised so far toward a new sanctuary organ. In addition to being used in worship services, the new combination digital-pipe organ would be used by secular community groups that perform in the sanctuary, including Music in the Mountains.