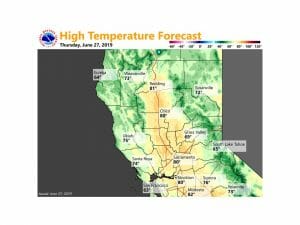 June 27, 2019 – Unseasonably cool daytime temperatures continue today, then a warming trend begins at the end of the week with highs gradually climbing to near average early next week. No precipitation expected except for a slight chance of showers or thunderstorms up near the Oregon border. Occasionally breezy winds the next few days.

Upper trough has settled over the region with an unseasonably deep closed mid/upper low centered over northwest Oregon. Skies are mostly clear except for thinning mid and high clouds along the upper level front over NorCal as the 500 mb speed max lifts into northwest Nevada. IR fog product indicates most of the low cloudiness remains along the coast, but a few patches may develop along the foothills to the east of Sacramento. Current temps range from the 40s to lower 50s in the mountains to the mid 50s to lower 60s across the Central Valley, around 5-10 degrees cooler across most of the area compared to 24 hours ago. 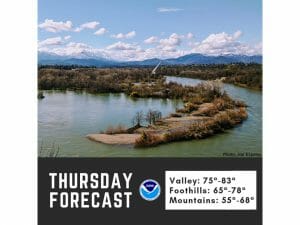 Today is expected to see the coolest temperatures of the week (well below average for late-June), then gradual warming is forecast into the weekend as the trough along the West Coast weakens.

The forecast period features the start of July which will continue where the end of June left off. An area of lower heights aloft is maintained as suggested by the latest ensemble systems (00Z GEFS and 00Z ECMWF). While the core of the upper low is expected to remain in the vicinity of the Pacific Northwest, the southward extension of this trough axis will encourage a continuation of below average temperatures for the first half of next week. Valley locations should stay a few degrees below early July climatology, but the mountains could depart by as much as 5 to 10 degrees. A trend toward average is possible by late in the week as the upper low shears out. Next week`s pattern is a dry one with any discernible precipitation remaining well to the north.