November 5, 2019 – Nevada County 4104-C Strike Team left on October 25th for the Kincade Fire in Sonoma County. At the time, the fire was at 21,900 acres and 5% contained. The team is being demobilized right now and will return to their fire stations today. These past 10 days these firefighters did some incredible work and went above and beyond their call of duty.

A social media post by KZST 100.1 FM, a Sonoma County radio station, caught our eye. One of their listeners shared the story of his brother who had to evacuate his home on Hwy 128 in Healdsburg. Leaving his home at night, he could not save cherished memories. However: “Jeff went to the property a couple days after the fire and saw that everything was basically reduced to ash. A day later he got a call from the fire chief telling him that in the midst of all the intense fire activity, with the barn and hillside next to his house in flames, several firefighters ran into his house and started grabbing everything they could that they thought would be greatly missed. They took pictures off the walls, photos, the family Bible, even the grandkid’s pictures on the fridge and many other items. The house was not in a position to be saved but they risked their lives in trying to save some meaningful belongings.”  [Source KZST] 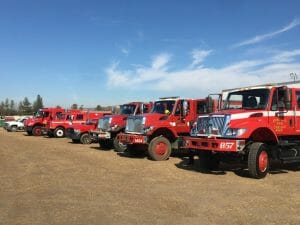 Those firefighters were members of strike team 4104-C, composed of:

The strike team was responsible for 2 miles of line in the Healdsburg area, with many structures and wineries.

Built in stages from 1860 to 1900, the barn is the only remaining intact building on the property. “We couldn’t get to the main building, but we were able to save the barn. It’s a historic building and a few days after the fire came through, they had a recovery wine tasting in the barn.” 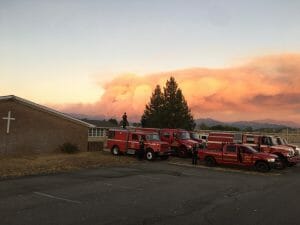 Ramey and his team members were part of the over 5,000 firefighters who fought this blaze at its peak.

Today, the 77,758-acre Kincade Fire is  84% contained and our firefighters are on their way home.

Welcome home and thank you!