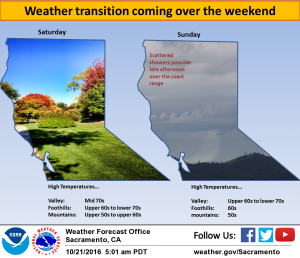 Upper level high pressure over the southwest U.S. will keep Northern California under fair skies today. The upper ridge axis will be shifting eastward today in response to an upper trough forecast to dig into the eastern Pacific. High temperatures today should come in around normal for this time of year or just a bit cooler than Thursday highs. A more onshore flow and a slight airmass cooling will bring still cooler temperatures on Saturday. Models in fairly good agreement in bringing a small scale disturbance across the northwest corner of the state Sunday afternoon or evening. This will bring a threat of light precipitation across the northwest corner of the state southward to about Chico.

A more defined frontal band is forecast to push into the north state Monday afternoon bringing precipitation to most of the forecast area by Monday evening. The northern mountains will see the greatest amount of precipitation but nowhere near the amounts saw last week. Breezy southwest winds and still more cooling will also result.

Trough of low pressure currently in the northeast Pacific continues to be on track to affect northern California throughout the long term forecast period. Model consensus continues to depict increased chances for rain and snow above 7500 feet for Tuesday with below normal high temperatures in the 50s and 60s.

The upper level low center is anticipated to retrograde back into the eastern Pacific on Wednesday as a stronger jet stream area deepens the upper trough off the coast. As a result, temperatures will warm slightly into the 60s and 70s with fewer chances for precipitation, although some chances still exist for some rain across the forecast area.