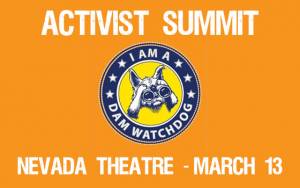 At the summit, SYRCL is bringing together a panel of speakers chosen for their expertise in law, hydrology, ecology, water politics, community activism, and local history. Speakers will provide information about the scope and cost of the project, the risks associated with building this dam, sustainable alternatives, and how community members can take action to challenge this contested proposal. This event will take place at the Nevada Theatre, 401 Broad St, Nevada City, from 6pm-8pm.

The Activist Summit will address what is at stake from an environmental, community, and cultural perspective so that citizens are informed to participate, engage, and hold NID accountable. Audience members will learn how local groups are closely following the permitting process and watchdogging NID’s attempts to gain ownership of land publicly held by the Bureau of Land Management.

The Nevada Irrigation District has proposed to build Centennial Dam—a new 275-foot dam and 110,000 acre-foot reservoir on the Bear River between Combie and Rollins. If built, Centennial Dam would inundate the last six miles of publicly accessible, free-flowing river on the Bear, completely flooding the Bear Campground, more than 25 homes and 120 parcels, 140 Native American cultural sites, and Dog Bar Bridge. The bridge is the only crossing of the Bear River between Highway 49 and Highway 174.

Local conservation groups, members of the tribal community, and concerned individuals have raised concerns over the actual need, the ever-increasing estimated cost, and the multitude of irreversible impacts of the project.

This educational public event will be moderated by Pascale Fusshoeller of YubaNet. KVMR 89.5 FM will broadcast the program live as well as stream on the web. The Centennial Dam Watchdog Activist Summit was made possible by the generous sponsorship of Denis Kutch of the Nevada Theatre Commission and Terry and Karen Brown.

The South Yuba River Citizens League (SYRCL, pronounced “circle”) is the leading voice for the protection and restoration of the Yuba River watershed. Founded in 1983 through a rural, grassroots campaign to defend the South Yuba River from proposed hydropower dams, SYRCL has developed into a vibrant community organization with over 3,500 members and volunteers based in Nevada City, CA.