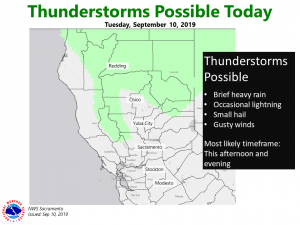 September 10, 2019 – A weather system will bring a chance of showers and isolated thunderstorms to the mountains this afternoon and early evening. Below average temperatures continue into mid-week.

A wind shift will provide a warm up and potential smoke issues for NorCal valleys from surrounding fires.

Dry weather returns for the end of the week before another system passes through potentially bringing some precipitation chances by early next week.

Another wave of energy will rotate around the low pressure center over the Pacific Northwest. This wave will move over Interior NorCal during the day bringing with it some instability and possible convection. Satellite imagery show open cellular cumulus over the ocean indicating some instability in the airmass. Models are in good agreement that between noon and 6:00 PM is the most likely timeframe for showers and isolated thunderstorms to occur. Best chances for showers are in the Sierra north of interstate 80.

Mid week temperatures will start to trend warmer as the trough pushes off to the east, allowing high pressure to rebuild across California. In addition, NorCal will see a wind shift to the north and east.

The speeds are expected to be below 15 mph, but this shift will have an impact on the smoke from area fires. Temperatures are expected to warm back to and slightly above normal (lower to mid 90s) Wednesday through the end of the week.

Cooling expected over the weekend with falling heights over interior NorCal as 534 DM upper low in Gulf of Alaska deepens and digs towards the West Coast. Models similar in swinging system inland across Northern California Monday into Monday night with some associated precip. At this time it appears the best chances for showers will be over the mountains and in northern and eastern portions of the Sacramento Valley. Will also need to consider adding possible thunderstorms to the forecast if model instability values continue to trend up with future runs. Activity winds down Tuesday as trough shifts into the Great Basin. High temperatures Monday expected to be upwards of 10 to 15 degrees below normal with slight warming Tuesday.