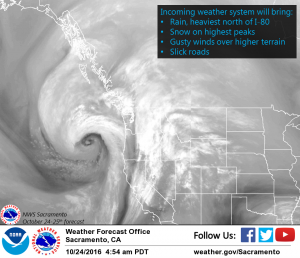 October 24, 2016 – Transition back to wet and unsettled weather will occur this week as several weather systems transit the area.

Showers and a few thunderstorms have become more numerous across the northern Sierra overnight as moisture and instability move up from the south ahead of the main weather system still offshore, and enough lift is present to realize precipitation. All the cloud cover is resulting in mild temperatures early this morning with readings in the 40s in the mountains and 50s to lower 60s elsewhere.

Wet weather will return to the remainder of interior NorCal later today and overnight tonight as the frontal system trailing from the deepening surface low off the PacNW coast moves inland. Satellite imagery shows plenty of deep moisture (TPW in excess of an inch) along and ahead of the front.

Most of the precipitation associated with the front will occur roughly along and north of I-80, with QPF tapering rapidly further to the south, as the front slows and weakens overnight into early Tuesday. Deep southerly flow will favor convergence at the north end of the Sacramento Valley and favorable orographic lift over the northern Sierra resulting in some health QPF in those areas (over an inch possible in the valley with several inches in the mountains). Snow levels will be high limiting accumulation to just the highest peaks.

Later Tuesday and Wednesday, we will likely see a break between weather systems with precipitation mainly lifting back to the north and west of the region as the next system develops offshore. Models have come into better agreement with timing and strength of that one lending greater confidence in the forecast with more precipitation spreading back into NorCal by later Thursday.

Unsettled pattern continues for the end of the work week into the weekend. Models in decent agreement with next wave as upper level low just off the coast will move onshore into NorCal during the day Friday into early Saturday. Pretty decent shot for precipitation across the entire area with PWAT values approaching 1 inch.

This wave looks fairly warm so snow levels are forecast above 8000-9000 feet. Most of the area may see a break in precipitation during the day Saturday although models hinting showers could continue across Shasta County for much of the day.

Next system will follow closely behind as another upper level low approaches the coast sometime on Sunday. Model differences remain this far out with timing and position of the low so details a bit uncertain but the good news is, the active pattern looks like it will continue!