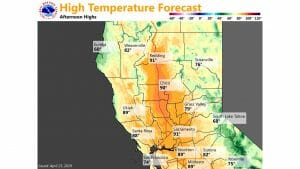 April 23, 2019 – Dry weather and warm temperatures through the week. High temperatures will peak today and Wednesday. A cooling trend is possible over the weekend.

Upper level ridge will remain over NorCal this week with dry weather and warm temperatures. Most Valley locations will reach their first 90 degree day of the season either Today or Wednesday. Temperatures will be 10 to 15 degrees above normal. These readings are within a few degrees of record high temps generally in the low 90’s this time of year.

A system passing north of the area Thursday may bring a few showers or thunderstorms to the Southern Cascades and Shasta county. Model agreement is poor with this system. The GFS is the only model with precip, NAM and Euro are dry. Will maintain low- end, slight chances and hope for better confidence when mesoscale WRF models come into view later today.

Temperatures will cool back into the 80’s Friday with lowering heights, as disturbances pass north of the area. 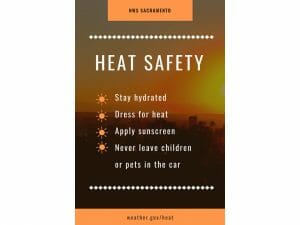 By the weekend, the synoptic pattern will be evolving away from a persistent ridge and more toward a split flow regime. The latest guidance continues to keep Northern California in between the active pair of jet streams. Within the southern stream, an upper low is forecast to reach the vicinity of northern Baja California by late Sunday. Ensembles do not show much north/south spread suggesting any impacts with this system are likely to stay over the southern half of the state. However, did keep low end chances for showers across Tuolumne County for Sunday into early Monday.

Within the amplified northern stream, a pair of notable longwave troughs are worth keeping an eye on. It appears the initial system should stay well to the north over the Pacific Northwest. By the early to middle part of next week, a trailing disturbance begins to arc southward toward the West Coast. It is difficult to say with any confidence whether or not this feature will track far enough south to impact the area. Did maintain the inherited chance for showers over Shasta County. Given the expected blocking pattern over the Central Pacific next week, this will continue to allow systems to approach the West Coast thereby eliminating any threat for more early Spring heat.

The warmest day in the extended range will be Saturday with Valley high temperatures in the mid 80s while 50s and 60s can be expected across the mountains. Thereafter, the influence of the mentioned troughs will allow for a cooling trend bringing numbers closer to climatology for late April.