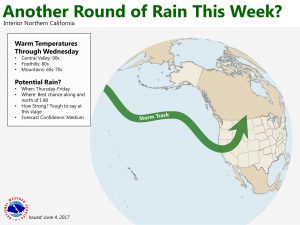 June 4, 2017 – Warm and dry weather through the middle of next week. Cooler with a chance of precipitation late next week.

Mostly clear skies prevail across interior Northern California under dry southwest flow aloft. An upper trough is approaching the Pacific Northwest and has aided in bringing synoptic cooling along with enhancing onshore flow. The marine layer at Fort Ord has deepened to ~1250 feet with breezy conditions near the Delta. Temperatures across the forecast area are running a few degrees cooler than 24 hours ago.

The aforementioned trough will move through the PacNW midday today. The best lift and instability will remain primarily across far northern CA and northward, but we can’t rule out a slight chance of some convection along the mountains in Shasta Co. For most of the region, the primary impact of this trough will be cooling of a few degrees compared to yesterday.

High pressure rebuilds over the Great Basin on Monday, extending west into California. Expect Valley high temperatures in the 90s Monday through Wednesday, with mountain highs in the 60s to 80s. Winds will begin to pick up on Wednesday in advance of the next weather system.

Models still in fairly good agreement in bringing a frontal band into northern California Thursday. Although still fairly weak, models have now dipped precipitation line farther south with the entire CWA under a threat of precipitation by Thursday night.

Frontal system pushes into the Sierra during the day on Friday where models show enough instability for a threat of isolated thunderstorms. Daytime highs will remain cool.

Models diverge going into the weekend. GFS digs the associated upper low into the Pacific Northwest and Norcal while ECMWF progresses the low inland while building a ridge over the west coast. GEM solution similar to GFS so have trended towards it leaving showers over the northern mountains and northern Sacramento valley.

Confidence in forecast remains low for end of extended period next Sunday with models even more varied on solutions. Have kept with middle of the road GFS approach with upper low over Great Basin and just a slight threat of showers over the Cascade range.