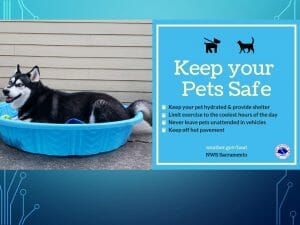 August 3, 2019 – Above normal temperatures this weekend, with the warmest day today. Dry weather continues into next week with a gradual cooling trend.

Ft Ord profiler shows the marine layer squashed under a temperature inversion just a couple hundred feet AMSL. Consequently high temps today will be a few degrees warmer than yesterday with readings in the upper 90s to low 100s in the Valley, 80s and 90s in the higher terrain, about 3 to 7 degrees above normal. 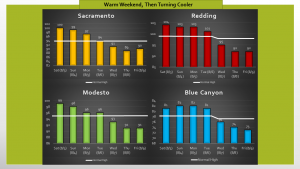 Some of the subtropical moisture rotating around the 4-Corners could spread mainly over the Ern portion (Sierra zones) of our CWA as as the entrance region of the upper jet lifts Nwd along the CA/NV border later today and into Sun morning. Convective potential in our CWA looks limited although some high-based cumulus clouds could develop over the Trinity Alps and near the Sierra Crest during the afternoons this weekend. Otherwise, RH progs suggest a little more high cloud cover will pass through NorCal Mon/Tue as the Ern Pac trof deepens.

Noticeable cooling is expected by mid week as an upper low off of the Pacific Northwest gradually moves inland and the ridge centered over the Four Corners shifts to the east. GEFS and ECMWF ensembles are in good agreement with this pattern shift.

NBM guidance suggests Friday should be about the same temperatures wise. As the trough shifts eastward, Saturday should see some warming back to around average.

In terms of precipitation, dry weather is expected to continue. Monsoonal moisture looks to remain to the south and east, while precipitation with the upper low should remain close to the core to our north.