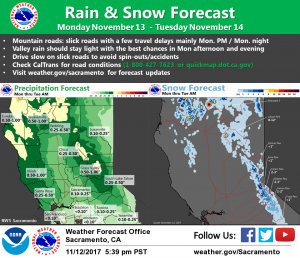 Light showers have been slowly working inland overnight as the weather system approaches. Precip amounts have been generally light ranging from 1/4 to 1/2 inch in the mountains north of Redding, less than 1/4 inch in the Coast Range and only a few hundredths of an inch in the far northern Sierra. With all the cloud cover, current temperatures are milder compared to 24 hours ago and range from the mid 30s to lower 40s in the mountains to the mid 40s to mid 50s in the Central Valley.

Weather system moves slowly south over the next 24 hours. Precip amounts will be light in the valley, but some mountain areas may see upwards of an inch. Light snow accumulations for the passes are expected with snow levels dropping to 4000-6000 feet, but travel impacts are expected to be minimal with 2-5 inch amounts possible through the higher passes.

Dry weather is expected Tuesday and Tuesday night with a weak high pressure in between the transition of the two disturbances aloft.

The next stronger system swings southward Wednesday into Thursday with another round of widespread precipitation. Models are in better agreement with this system, but the EC remains a little slower. This system will have the potential for more significant precipitation and winter weather impacts for the mountains.

Upper level ridging will lead to dry conditions and a slight warm up across interior NorCal on Friday. The pattern becomes uncertain beyond Friday regarding the upcoming series of storms given model disagreement. Although a moisture tap will be in place, confidence is low in terms of the progression and evolution of precipitation. Therefore, have slowed timing and lowered PoPs accordingly. Moreover, it is too early to determine any potential impacts given model differences.