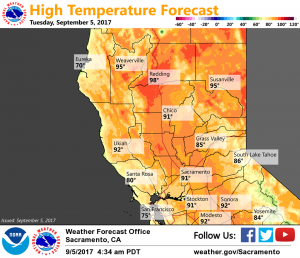 September 5, 2017 – Cool down continues this week with seasonable temps by Wednesday. Showers and thunderstorms possible, mainly over the mountains.

Upper level low associated with the remnants of tropical storm Lidia continues to spin off the coast of California. Moisture from the system continues to move up across NorCal which is currently resulting in high clouds. While still mild, temperatures are considerably cooler in most areas compared to 24 hours ago and generally range from the mid 40s in the mountain valleys to the mid 70s across portions of the Central Valley.

Little change expected through Wednesday as the offshore low slowly lifts northward, though temperatures will continue to trend lower. This will continue to result in plenty of cloud cover across the region with sprinkles and mainly mountain showers and thunderstorms.

The low redevelops off the coast by Thursday as the tail end of a northern stream system lingers. This will keep the cooler weather through the end of the week along with keeping a chance of showers and thunderstorms in the forecast.

An upper level trough will close off along the Southern California coast and will linger there through the weekend. Moisture continues to look limited for precipitation, with just a slight chance of showers and thunderstorms over the Sierra south of I80 through the weekend. The upper level low gradually shifts northward off of Northern California early next week and then move inland. This could pull up some monsoon moisture to the north leading to the possibility of mountain thunderstorms spreading northward through the Sierra Monday and Tuesday. The latest GFS model is even hinting at the possibility of some storms even spreading into the Valley early Monday and on Tuesday, but will hold off including them in the forecast until there is more model consistency.

High pressure ridging centered over Four Corners area will gradually shift westward, bringing some warming over Northern California. The temperatures are forecast to be just slightly above normal on Saturday, with Valley highs generally around 90-95. Temperatures will warm further on Sunday and Monday, with some spots in the northern Sacramento Valley possibly reaching 100. Cooling is expected to begin on Tuesday as the upper low moves inland over the area.