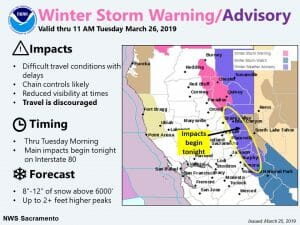 Radar indicates just a few light pre-frontal showers across the northern half of the forecast area early this morning. Otherwise, mid and high clouds cover much of the region. Current temperatures are mild and range from the 20s and 30s in the mountains to the mid 40s to mid 50s across the Central Valley. 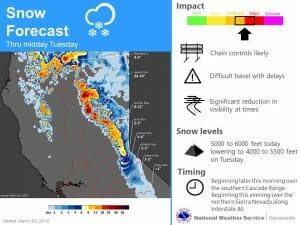 Satellite imagery shows the large closed low off the coast, centered along 140W just north of 40N, and moving only very slowly. Heavier precipitation along the front offshore is mainly moving northward as the eastward progression has nearly stalled. Have continued the previous trend and slowed the onset of precipitation spreading inland later today, especially across the southern half of the forecast area. It will likely be this evening before any meaningful precipitation spreads into the northern Sierra, and have downgraded the warning for that area to an advisory.

Some residual light precipitation expected to linger Tuesday as warm-advection increases ahead of the next system. An isolated thunderstorm or two may develop across the northern Sacramento Valley in the afternoon.

The next system moves in Tuesday night into early Wednesday and is expected to bring heavier snowfall to the mountains along with lower snow levels. The system will be more convective with steeper mid-level lapse rates enhancing snowfall rates over the mountains. Sufficient shear and instability appears possible for stronger thunderstorms across the area Wednesday afternoon.

Cyclonic flow with embedded short-waves will keep a threat of showers across the area on Thursday.