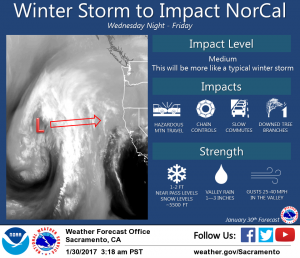 Thinning high clouds across the region early this morning. Temperatures are in the teens and 20s in the colder mountain valleys, in the 40s to lower 50s across the thermal belts and in the 30s through the Central Valley. Expect we’ll see some patches of fog once again across the southern Sacramento Valley and northern San Joaquin Valley as temp/dp spreads have reached saturation a little earlier than yesterday.

High pressure will continue to dominate the weather pattern the next several days resulting in more mild days and cool nights. Change begins Wednesday as the ridge shifts east and high clouds increase.

Light precipitation will be possible as early as Wednesday evening, but more significant rain and mountain snow (above about 6K ft) along with gusty winds will develop on Thursday. An inch or more of rain will be possible in the valley while the higher elevations may see a foot or more of snowfall. 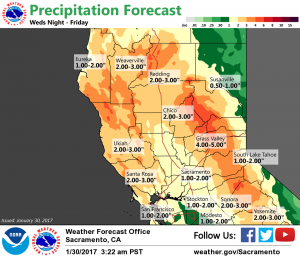 Thursday storm system will continue to impact NorCal on Friday into early Saturday as trough moves inland. Moderate precipitation will continue over the mountains while becoming more showery in the Valley during the day Friday.

Breezy winds may bring down additional tree branches and cause localized power outages. Travel over the mountains will continue to be hazardous as snow levels remain around the 5000-5500 foot level with additional snow accumulations of 6 to 12 inches near pass levels during the day.

Depending on timing of trough moving inland later Friday, could see an isolated thunderstorm or two in the Valley as model sounding profiles hint at a bit of instability. Too early to nail down these mesoscale details so for now have left thunderstorms out of the forecast.

A few showers will linger over the northern mountains on Saturday with weak ridging providing dry weather elsewhere. Models hint at active pattern past Saturday but large differences between ECMWF and GFS. GFS deflects most precipitation north of the state as ridging wins out while ECMWF breaks down the ridging faster and brings another wet system into NorCal by the end of the weekend. Something to watch going forward.