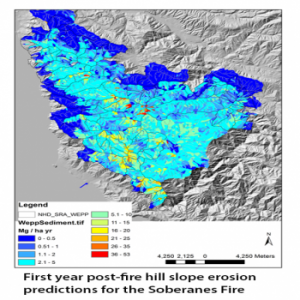 June 16, 2017 – Burned Area Emergency Response teams— they may be one of most important parts of wildfires that you’ve probably never heard of. As the last flames of a raging wildfire are being contained, these BAER crews begin safeguarding lives, property, and natural resources threatened by additional perils that fires create.

For BAER crews, this means time is of the essence. Their first task? Create a burn severity map that reflects the changes in both land-cover and soil properties caused by the fire. The maps inform the teams’ recommendations and decisions on stabilization and recovery for the burned area, or burn scar. Actions typically include treatments such as laying down mulch, erecting silt fences, or planting quick-growing seeds. “In order to be effective, those treatments must be in place before the first major storm hits,” Miller added.

Assembling the spatial data needed to make these recommendations typically took multiple days—time the BAER teams can ill afford. With the need for speed in mind, Miller’s team created a database that now automatically integrates and assembles NASA satellite and other data needed to start the recovery planning process much sooner.

With RRED, BAER teams and other users first upload their soil burn severity maps, which they derive from both satellites and field data. “Landsat 8 is frequently used by BAER teams; however, multi-spectral aerial imagery and other imaging platforms like EO-1’s ALI, MODIS, and VIIRS can be used as well.” Miller noted. Once the user uploads the map, RRED combines it with vegetation, soil, and elevation layers derived from Earth observations, and delivers a composite map pre-formatted for model input.

With that data quickly assembled, the teams can focus the bulk of their efforts on modelling the effects of multiple weather scenarios. They can assess alternatives and determine which locations in the burn scar are most vulnerable to erosion, flooding, and landslides.

The extra time RRED gives was critical for busy response teams in California in 2016, as wildfires scorched more than a half-million acres across the Golden State.

An illegal campfire sparked the Soberanes Fire. It eventually became California’s largest wildfire of the year, burning more than 132,000 acres. By the time crews finally contained the blaze, it was the most expensive firefighting operation in U.S. history.

For his post-fire strategy, Watershed Emergency Response Team member, Jeremy Lancaster, turned to Miller and RRED for rapid guidance. He was concerned about the impacts any rainfall runoff could have on nearby roads, infrastructure, recreation areas, and wildlife—things known as “values at risk”.

“The state teams used the [RRED] results…to identify areas of elevated sedimentation [with the] potential to impact drainage structures and other values at risk. The erosion model results assisted the teams in identifying areas of concern and in developing recommendations for emergency protective measures,” Lancaster said. “Typically these include t-posts, silt fences, debris racks, etc.”

Less than a month later, California had another wildfire on its hands. And RRED helped response teams once again.

The Cedar Fire swept across California’s Sequoia National Forest during the late summer. This wildfire became Miller’s first chance to see how BAER team members were successfully using RRED on their own—with minimal help from her. “I stepped back and instead assisted Forest Service teams in performing the modeling independently,” Miller said. “Spoiler alert—they did great!”

USFS Soil Scientist Lizandra Nieves-Rivera used RRED to guide her BAER team’s post-fire recommendations for the local recreation areas, roads, and drainage structures impacted by the Cedar Fire. The potential threats to, and distance from, the values at risk didn’t justify additional actions, so the team proposed no mulch treatments. “The comparison between [the storm models] helped the team determine, explain, and backup the high cost versus the level of risk,” she observed.

For Miller, this was a big step for RRED as a decision-making tool. “The independent use of our new Rapid Response Erosion Database was an important milestone for the project,” she remarked.

In 2016, Miller worked feverishly to expand the RRED database from 17 fire-prone Western states to the entire Lower 48. She said the next stage of this project is to fully transfer RRED to a USFS server in 2017. Miller added, “We also plan to continue to make the database more user friendly with our new open-source interface. BAER teams are under serious time constraints so streamlining the process is important for operational use.”

Further down the road, Miller and her team hope to make RRED available to a much wider audience. “I would like to expand spatial coverage to include all fire prone areas of the world.”

What happens after a wildfire depends a lot on preparations and activities before any wildfire. Thanks to Miller and her team’s application of Earth observations, communities are better prepared to deal with the aftermath of fires.

Climate costs smallest if warming is limited to 2°C