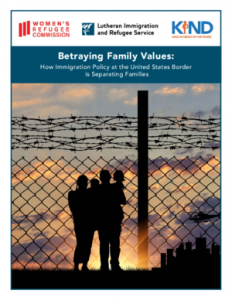 WASHINGTON, March 10, 2017 – Over the past five years, the United States has seen a shift in the demographics of migrants encountered at our borders—from a majority of adult males, often from Mexico, seeking employment, to families, children, grandparents, aunts, and uncles fleeing together, seeking protection in the United States, coming mostly from Central America. Tragically, U.S. immigration enforcement policies, instead of shifting to adapt to this significant change, have continued to try forcing a square peg into a round hole, and in doing so have compounded the vulnerabilities of families and protection-seeking migrants. Instead of promoting family unity, we as a nation are breaking families apart.

This report documents the ways in which family separation is caused, both intentionally and unintentionally, by the U.S. government’s immigration custody and enforcement decisions. It explains how the government’s lack of consistent mechanisms for identifying and tracking family members result in family members being detained or removed separately and often losing contact with each other. Because the Department of Homeland Security and other government agencies currently have little policy guidance on humanitarian considerations during enforcement actions, many families are needlessly torn apart.

Family Separation Backgrounder
Betraying Family Values Full ReportThis report demonstrates how the process of enforcement along the border subjects families to separation, how children, even when accompanied by a parent, can be rendered unaccompanied, and how such separation impacts the family’s well-being and access to due process. Finally, this report explains how family separation through the deportation process is dangerous and impedes safe repatriation and reintegration. Our findings of policies and practices in this report have been informed in part from our discussions and interviews with the Department of Homeland Security (DHS), DHS Policy, DHS Office for Civil Rights and Civil Liberties, DHS Office of Inspector General, Immigration and Customs Enforcement (ICE), Customs and Border Protection (CBP), and the Department of Health and Human Services Office of Refugee Resettlement (ORR).

Family unity is important not only to maintain the integrity of the family unit, but also because its destruction has a detrimental impact on liberty, access to justice, and protection. It also negatively impacts emotional and psychological development and well-being, creates security and economic difficulties, and strips the dignity of an individual and their family as a whole. In addition, it is a fundamental human right enshrined in international and U.S. child welfare law.

The federal government should prioritize liberty and family unity in its immigration policy, including enforcement actions. Government agencies with enforcement and custody responsibilities should have mechanisms to identify family members, and to prevent, mitigate, and track family separation in all cases. Instead of pursuing policies of deterrence and detention, family unity, the right to liberty, and reunification must become presumptive principles.

Ensuring family unity does not require legislation, but can be achieved with administrative changes. These changes include:

While it is not yet clear how the Trump Administration will implement the border enforcement policies laid out in the President’s recent executive order, it is clear that the needless separation of families during immigration enforcement along the southern border will not only continue, but worsen. The Administration’s elimination of existing prosecutorial discretion and parole policies, and plans to prosecute parents, combined with its goal of universal detention will break even more families apart and leave even more parents to make the heart-wrenching choice between family separation and return to a country where their and their children’s lives are at risk.

The consequences of family separation are clear and the urgency for policy change cannot be dismissed. As families continue to seek protection at our borders, KIND, LIRS, and WRC hope that this report will inform policymakers, legislators, and the public of how border enforcement policies have long failed families, and of the increased risks and costs of indiscriminate enforcement and detention on family unity and child well-being.

The Women’s Refugee Commission improves the lives and protects the rights of women, children and youth displaced by conflict and crisis. We research their needs, identify solutions and advocate for programs and policies to strengthen their resilience and drive change in humanitarian practice. Since our founding in 1989, we have been a leading expert on the needs of refugee women and children, and the policies that can protect and empower them.  www.womensrefugeecommision.org